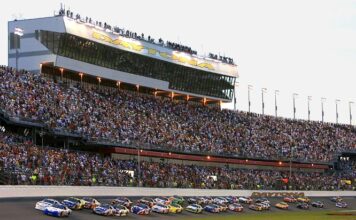 [/media-credit]Recently announced to take place at Daytona during Speedweeks 2013 is the inaugural “UNOH (University of Northwestern Ohio) Battle at the Beach” event that will include three non-point special races for the NASCAR K&N Pro Series, NASCAR Whelen Modified tours, and the Late Model division of the NASCAR Whelen All-American Series.

All these series are used as stepping stones to NASCAR’s more lucrative national series, such as Sprint Cup and Nationwide.

The series’ will race on a temporary oval slated to be a quarter mile (0.4) in length built on the 2.5 mile superspeedway’s back stretch.

“When I think about adding a short track event here, it’s just an opportunity to connect with that local racer supporting NASCAR,” Mr. Chitwood said.

He also went on to say he is thrilled to give young drivers the opportunity to fight for a win at the” World Center of Racing”.

“Many of NASCAR’s greatest stars cut their teeth on short tracks around the country and we look forward to hosting the stars of tomorrow in 2013. Whether it’s a hobby or profession, everybody should have the chance to race at Daytona. ”

The criteria for setting the field in the event include: winners of the 2012 NASCAR K&N Pro Series East and West events as well as the series champions will automatically be locked into that series’ race at Daytona next year.
Additionally, winners of the NASCAR Whelen Modified Tour or NASCAR Whelen Southern Modified Tour races this season and series champions will be locked into the Modified event.

The top 10 finishers in this year’s NASCAR Whelen All-American Series Division I national standings will earn a starting spot in the Late Model race.

And the champions of the NASCAR Canadian Tire Series, NASCAR Toyota Series from Mexico, and Euro Racecar NASCAR Touring Series this season will earn a protected starting spot in whichever one of the three 2013 Daytona races they choose to run.

The remaining spots in next year’s features at Daytona will be filled through time trials and heat races.

The “UNOH Battle at the Beach” event is scheduled for February 18-19, 2013, the Monday and Tuesday before the Daytona 500. Days that are also known as Daytona International Speedway’s “dark days”.

Pato O’Ward breaks through at Texas for first career win