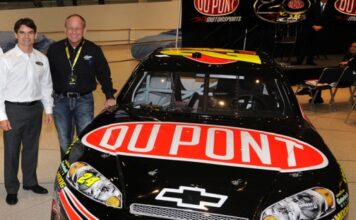 [/media-credit]Jeff Gordon has been racing in NASCAR for 20 years now and has kept a solid partnership with sponsor, Dupont, through that time. To honor that partnership, Gordon is running a special paint scheme this weekend at Las Vegas Motor Speedway.

“I’m very proud of it –that’s for sure,” Gordon said. “Just the fact that I’ve been driving in this series for 20 years is one thing, but to know that we’ve had a sponsor be there with us the entire way as well as Pepsi. We’ve obviously put a great combination together that’s worked out very well for us as well as the business for DuPont and other sponsors.  It’s something that we’re definitely very, very proud of. I think it’s awesome that they’re celebrating in the way that they are this year by the 20th anniversary paint scheme and logo and we’re going to have a lot of fun.”

Gordon added that he still remembers when he first signed with Rick Hendrick and Hendrick Motorsports and they were going to talk to Dupont about being an associate sponsor. That meeting turned into Dupont becoming a full-time sponsor and seeing four championships and over 80 career victories.

In his career in NASCAR, Gordon has seen a lot of changes in the sport, with this year marking the biggest change with the electronic fuel injection.

“This car was probably the biggest number one change or anything that I’ve ever had to deal with was just completely adapting over to a new car with a splitter, bump stops — completely different aero package,” he added. “Some of the highlights that stick out in the mind throughout the years is just aero in general, mainly just aerodynamics and tires have been the biggest change.  I look back to some shots of the car from ’94 and ’95 on the race track and our air dam is this high off the ground in the corners and the skirts on the right side aren’t sealed off.  I just think, ‘Gosh, just think how fast we would have gone if we would have known what we know now.’”

Gordon went on to say that he remembered when big sway bars and big rear springs came into effect.

“It used to that you would use all the mechanical grip of the springs and the shocks to make the cars last over a long run and the cars gave up a lot of speed throughout a run so you could manage that,” he continued. “The way we set the cars up were more about tire management and now it’s just all about aerodynamics. I remember that time when it came and that definitely took me a while to adapt to that.  We finally did adapt to it and then we won the championship in 2001.”

One of the places that Gordon says hasn’t seen a lot of change is Martinsville, and that’s one track that he has had a lot of success at.

“I feel like Martinsville is that one place that I can go to every time and give good information back to the team to keep us fast throughout the race,” he said. “To me, of all the tracks, the least amount of changes and that’s where experience can really pay off.”

Most recently, Gordon’s life has changed outside of racing with the birth of his two kids, Ella and Leo. Gordon is glad to have had both his children at the current age of 41, instead of when he was younger.

“I got married the first time very young and if I had children at 25 or 26, I don’t think I would have been ready for it,” he explained. “I don’t know if I would have been able to stay as focused on my career.  Or one would have suffered more than the other and so I think now I’m able to balance it out, I feel like, pretty well and enjoy both.”

Gordon hasn’t had it all easy off the track either, as with the divorce from Brooke Sealy. However, he says he’s fortunate to have had things go the way they have.

“In my life I have been so fortunate that when things didn’t go exactly as planned, I’ve been very fortunate to bounce back,” he said. “I was fortunate enough to meet my wife Ingrid that she and I at that time wanted to have children.  We felt like it was the right time in our lives.  There’s no doubt that I’m very thankful it happened when it did and that it happened with her.”

In looking back at everything, Gordon says that he feels fortunate to have had the opportunity to work with the different people he has worked with.

“I’ve just been a part of great teams that have allowed me to be consistent with having that type of success,” he said. “To me, you always hear that success breeds success — to me, as things started going well on the track it allowed me to start thinking about things off the track and trying to come up with the best plan if things go this way.  You hope that they go in a positive way and for me they have.”

Gordon will start the race this weekend at Las Vegas in the 16th position while teammate Kasey Kahne leads the field to the green flag.