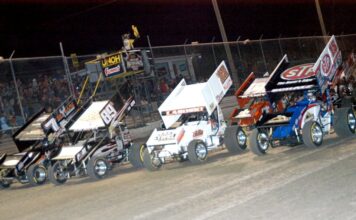 [/media-credit]The Outlaws knew the rain was coming to the Thunderbowl Raceway at Tulare, California and they were determined to beat the storm. Hot laps began about 45 minutes early in an attempt to get the whole show in before mother nature dropped added moisture onto an already soupy track. Hot laps went off without a hitch and qualifying saw lap times of 13 seconds around the 1/3 mile track. Quick time was set by Kasey Kahne Racing’s Joey Saldana with a lap of 13.151 seconds. He was followed closely by Sammy Swindell, who entered the event as the series points leader, with a time of 13.641. Craig Dollansky, Tim Kaeding and Kraig Kinser rounded out the fast five all with laps in the 13 second bracket.

The heat races were for the most part hard charging but unremarkable with 20 time Outlaws Champion, Steve Kinser taking the first heat, 4 time series champion, Donny Shatz the second, and Jason Sides the third.

The Dash inversion was an 8. Which meant that Joey Saldana would start outside the 4th row. By virtue of his heat race win Steve Kinser would start on the pole flanked by Jason Sides for the 8 lap dash to determine the first 5 rows of the A main. Jason Sides would get an early jump on Kinser and take over the point and would hold it until the checkers to claim the pole for the A Main. Transferring in from the B Main were Cody Darrah, Tyler Wolf, Trey Starks, Cory Eliason, Chad Kemenah and Bill Rose. The field was set for what would be a fierce pack battle for the Thunderbowl night 1 trophy.

Steve Kinser would take the lead early in the Main but Tim Kaeding who started fourth would rocket by Kinser on the high side on lap 9. The pass would not be without it’s price as Kaeding while attempting to lap Bill Rose would have some contact and damage the nose wing of the car. The wing would collapse on the left side but Kaeding would continue to pull away from the 20 time champion. On lap 11 Kinser would got together with Rose and spun the car into the infield and continued on. The caution would fly and Kinser was placed by Outlaws rules where he would have blended into traffic leaving him to restart in the 12th position. This would bring Jason Sides to the second position. Sides would start side by side with Kaeding 6 times but was never able to capitalize on the restart.

On lap 26 the A main short circuited. The short began when Jonathan Allard stopped on the front stretch because he was out of helmet tear offs and could not see. It was followed by Kerry Madsen’s roll over in turn 2 and Bud Kaeding coming to a stop in turn 2. It was then that mother nature made her presence known. Scattered heavy showers limited visibility for the drivers and they voted that it was too wet to continue. The race was red flagged and the cars were sent to the work area in the pits where they could make whatever changes they wanted to their cars including changing tires.

Upon return to the track The final red flag would fly on the restart when Sammy Swindell and Lucas Wolfe would tangle and roll in turn 2. Both drivers would walk away uninjured but neither would return to the track. The final yellow would fly for Chad Kemenah’s spin in turn 2. Kaeding would jump out to a big lead once again when Jason Sides hesitated on the restart. The hesitation would cost Sides the second spot to Craig Dollansky. Kaeding would never look back and would win the Thunderbowl with ease. Kaeding who is the first 2nd time winner of the 2012 season stated, “My motto is live and die by the high side and I was livin’ it up tonight.” Finishing 2nd Craig Dollansky,3rd Jason Sides, 4th Terry McCarl, 5th Joey Saldana, 6th Donny Shatz,  7th Steve Kinser, 8th Austen Wheatly, 9th Bud Kaeding and rounding out the top ten was Kraig Kinser.

This race was a smorgasboard of action. The fierce competiton between Sammy Swindell and Joey Saldana. The incredible skill and determination of Steve Kinser to come back from 12th spot to finish in the top 10. A hail mary move by Donny Shatz to propel him into fifth spot which he eventually lost to Joey Saldana but would pick up 1st in the points with Sammy Swindell’s misfortune late in the race. Kraig Kinser extended his streak to 5 races in the top 10. Honestly, there was no where to look and not see hard core racing. The Outlaws came to dominate the night and to race on the very edge of the envelope and they did exactly that.

Kudos to Outlaw and track officials on waiting the shower out. With only 10 laps to go many series would have thrown the checkers and said lets go home boys. Instead they waited it out and kept trucks on the track to maintain the pack and went back to racing. Kudos to the drivers for braving a “snotty” (wet and slick) track to quote Johnny Gibson, the voice of the outlaws, to finish the show for the fans in the stands and for those who were listening and following at home.

Note: In a morning press release from The World of Outlaws Sprint Car Series the second night at Thunderbowl speedway has been rained out. But both the track and the series are working diligently to schedule a make up date. For updates on a rescheduled date, go to www.ThunderbowlRaceway.com or www.WorldofOutlaws.com.