Will Power looks for fourth consecutive win of season at Indianapolis 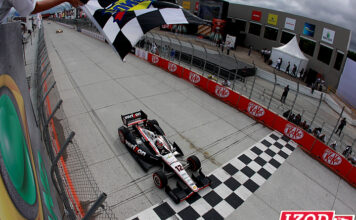 [/media-credit]For the third straight race in the IZOD IndyCar Series last Sunday, Will Power found victory lane to give Penske Racing an early season sweep in the first four races. Power once again conserved another fuel for the second straight week.

“It just happened to fall into a two‑stop strategy for Ryan and myself,” he says. “I’m not sure about Takumo, but that was the right strategy, and we both had to save fuel but maintained a pretty good lap time. Yeah, just a solid day when you look at it, very solid, no mistakes.”

With the success early in the season, he now leads teammate Castroneves by 45 points. Power has gotten to a good start other years, then fallen off in the middle part of the season.

“I just think we never expect ‑‑ don’t expect it, definitely not this year,” he says. “We’ve had some great starts to this season, the last two years and fell short both times. So keep the head down, just try to enjoy it, enjoy my race.

Power has been known for being a road course racer. However, last year had success on the ovals as he scored a win at Texas and finished in the top five in four of the six oval races.

He says there is no magic secret to being successful as it’s all about being mistake free, having the right strategy and having a good car.

“We have data that we can overlay amongst the teammates and understand where it can go quicker and where we’re struggling,” he says. “If we can put all that together, ultimately you’re the quickest. But racing, you need a bit of luck, good strategy, no mistakes, and that’s how you win races.”

For Power, it will be all about carrying new attitude to the race later this month on May 27th.

“I try to just enjoy each race, and you know, just have fun with it rather than be so intense about it,” he says.