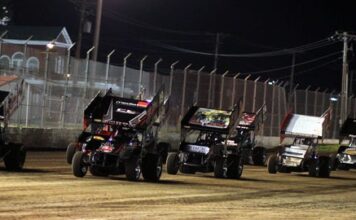 [/media-credit]The Greatest Show on Dirt brought their magic to Rolling Hills Raceway aka “The Fast Track” was one of three founding-member speedways when DIRT Motorsports was established in 1976, Rolling Wheels has matured into one of the most respected ovals on the entire circuit. The big 5/8-mile banked layout was first mapped out by the late Bob Petrocci, once a competitor himself at neighboring Weedsport Speedway. This is the largest track the WoO drivers will compete on this year.

The only glitch in the evenings action seemed to be when The New York State Liquor Authority didn’t come through on the liquor license in time for tonight’s race. Fans were allowed to bring beer in stadium size coolers, but no glass bottles were allowed.

Although a late afternoon rain shower cooled the temperature off considerably with the temperature at race time being 58 degrees. But the racing was red hot from qualifying all the way through to the final lap of the A Main.

Quick Time would be set by last years WoO ROTY and Kasey Kahne Racing driver Cody Darrah, who turned a lap of 16.257 or138.402 mph. The top 15 qualifiers were separated by just .547 of a second.

The first heat race saw a strong front row with last weeks winner at Williams Grove, Freddie Rahmer starting on the pole with Volusia Park winner and former Outlaws champion Danny Lasoski on the outside. The heat race was a fast hard charging race that Lasoski would win in dominate style over Cody Darrah and Freddie Rahmer. Lasoski and Darrah would advance to the Dash and Rahmer Kerry Madsen, Lance Dewease, and David Gravel would all advance to the A Main.

The second heat race would find the 20 time WoO champion Steve Kinser on the pole with Jac Haudenschild starting outside. The race would be a high speed ballet of position switches and tip toeing around a very narrow and slick track. Joey Saldana would come from 4th to take the victory while Steve Kinser would finish a solid second to advance to the dash. Haudenschild would lead Daryn Pittman, Paul McMahan, and Michael Parent to the A Main.

The 3rd Heat race was more of the same with 4 time champion and current points leader Sammy Swindell starting on the pole and to his outside a familiar sight in the STP/Tony Stewart Racing number 15 of Donny Schatz. Schatz and Swindell traded the points lead back and forth until last week when Steve Kinser took over the 2nd spot leaving Schatz just 12 points back. Swindell would dominate until the final lap when his car began smoking heavily on the back stretch. But Swindell would hold on to win the heat with Schatz closing fast. Both Swindell and Schatz would advance to dash. But Swindell would make the first of 2 engines changes on the night. Also advancing to the A Main were Chad Kemenah, Craig Dollansky, Logan Schuchart and Kraig Kinser.

The Dash inversion was a 6 putting Cody Darrah in the 3rd row to start. In the end, it would be Paul McMahan on the pole of the A Main followed by Chad Kemenah, Craig Dollansky, David Gravel and Donny Schatz. The Dash would find Sammy Swindell with another engine letting go and relegating him to the tenth spot on the start of the A.

The Last Chance Showdown was scheduled to start 8 cars and transfer 6 to the A Main with 4 getting their time back and the last two taking the tail of the field. But Lucas Wolfe would scratch for the night after losing an engine in the heats as would Blake Breen. That pared the field to 6. Jessica Zemken would lead for the majority of the race before losing an engine and catching on fire between turns 1 and 2. She climbed from the car quickly and was unhurt. The race would be won by Justin Barger, followed by Glen Styres, George Suprick, Chuck Hebing, April Wilson and Zemken would be credited with 6th.

When the mighty wings of the greatest show on dirt took the track for the A Main, the top 5 rows were a who’s who of racing. Tough competition all the way through. It was hard to pick a winner even for the staunchest of dirt racing fans. With 30 championships starting in the top 10 there was little doubt that this was going to be a hard fought race and the winner would have earned his $10,000 winner’s purse tonight.

Paul McMahan would take the early lead and never look back. Leading all 25 laps despite hard charges and challenges from David Gravel early and Craig Dollansky late. But through the top 10 it was a show worth twice the price of admission amongst some of the greatest drivers of our time. Danny Lasoski was in championship form cutting his way up to 4th. Steve Kinser would come home 5th. And even after changing 2 engines Sammy Swindell would come home in the seventh position. Interestingly enough all 30 of those championships would finish in the top 10. The Hard Charger award would go to Jessica Zemken who climbed 11 positions in the A main after blowing an engine in the B Main.

The points closed up almost as tight as the racing with Steve Kinser closing to within 4 points of Sammy Swindell and Kinser well he can’t breathe too much because team mate Donny Schatz is right there just 10 points back.

At the end of the night, fans and media alike had to sit back and take a breath. They had just witnessed racing at it’s finest. They had witnessed the unique and beautiful joining of man and machine in a display of skill that simply can not be matched else where. The graceful ballet of the masters of dirt had once again played out in front of an eager and excited crowd and they had not disappointed.

As the crowd gathered at the entrance of the pits, the masters prepared to meet their supporters, sign their names, pose for pictures, and answer questions both easy and hard. To the casual observer it was hard to tell which group was more excited the legions of fans or the master’s that thrilled them.

The World of Outlaws will run again on Saturday the 19th at the Orange County Fair Speedway in Middletown, New York. Good tickets are still available. If you are in the area treat yourself to the Greatest Show on Dirt. You will never be sorry.

The reigning seven-time F1 champion is set to bid for a record eighth title in 2021 with Mercedes.
Read more