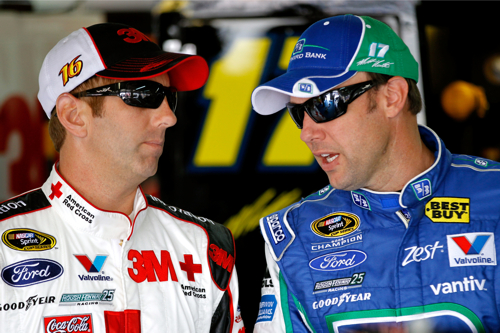 [/media-credit]NASCAR’s superstars will fight for supremacy in their own backyard this weekend, and while the format is different for the All-Star event, it is a guaranteed fight to the finish. In order to brawl for the big bucks, some of the sports most popular players must make their way to the main event.

Dale Earnhardt Jr. will be amongst the 22 competitors pounding the pavement in the Sprint Showdown. The top two finishers will advance to the All Star Competition, along with the fans vote. Giving three racers the chance to mix it up, and run for the million-dollar payday.

The Showdown will consist of 40-laps and gets underway at 7 pm. EST. Earnhardt, who will drive the black and orange foundation car hopes to earn one of the top two finishes. “We’re working on trying to win our little race,” Earnhardt Jr. said. “I’d like to allow someone else to have the fan vote.”

A.J. Allmendinger, who scored his qualifying lap at 192.465 mph, will lead the Sprint Showdown field. This is his fourth appearance in the showdown. In 2008, he won the race and advanced to the All-Star Race. Allmendinger, driver of the No. 22 Pennzoil Dodge is prepared to take it one race at a time. His first goal is to make it into the big race.

Martin Truex Jr., will sit outside the front row. Rounding out the top five starters are Earnhardt, Jeff Burton and Aric Almirola.

The segmented All-Star race consists of 90 laps and will get underway at approximately 9 pm EST. Three 20-lap segments will set the field for a 10-lap sprint to the checkers.

Kyle Busch’s qualifying run topped the charts at 115.112 mph, the average of three laps with a full-service pit stop, giving Busch his third All-Star pole. Busch and the No. 18 M&M’s Toyota Camry, won $50,000 for his pole run, a repeat of his 2011 performance. While Charlotte Motor Speedway is Busch’s proclaimed favorite track, he has yet to secure a win at CMS in Sprint Cup competition. He will lead the field of 23 competitors to the green flag.

Kasey Kahne driver of the No. 5 Farmer’s Insurance Chevrolet will go to a backup car for Saturday night’s event. Kahne hit the wall during his practice run when the rear of his car jumped out of line. The car suffered major damages.

A win in Saturday’s race is not only a confidence booster or a big payday. It is bragging rights until teams return to Charlotte next May, and they do battle again.

“You never know what’s gonna happen, said Edwards, the defending All-Star race winner and driver of the No. 99 Fastenal Ford. “I think I can speak for most of the drivers and be completely honest and say that if a driver’s car is faster than the guy in front of him, and it’s for $1 millions bucks, there’s not gonna be a lot of patience,” Edward continued. “I’d hate to guess how much chaos there would be if there was a green-white-checkered, double file restart for $1 million bucks. Edwards concluded by saying, “That would be insane.”

Until the checkers falls, anything can happen under the lights in Charlotte. In addition, anyone that starts the race can win it.

NOTES: Jimmie Johnson’s Lowe’s team performed flawlessly and stole the thunder from Denny Hamlin’s Fed Ex team in the Pit Crew Challenge held Thursday night at the Time Warner Arena. Johnson and Hamlin were among the drivers that watched their teams perform at break neck speeds, showing true athleticism and physical speed. Team and Individual winners are rewarded and recognized by the sport during Saturday night’s All-Star event. As a reward to the team, Johnson will choose his pit box first for the All-Star race.

“They’re still on cloud 9,” Johnson said Friday in the Charlotte Motor Speedway media center. “Winning last night puts us in a good position, and hopefully (Saturday) night we’ll have a good night on track to help us take advantage of that.”

Matt Kenseth will debut his new sponsor Fifth Third Bank and their signature blue and green colors. Tony Stewart’s No. 14 Chevrolet will carry camouflage paint scheme in honor of the Wild Turkey Federation. Meanwhile Jamie McMurray’s Bass Pro Shop Chevrolet will feature a white camo pattern. Greg Biffle’s machine along with Jimmie Johnson’s machine will carry a more patriotic color scheme. Even Johnson’s helmet is apart of the unique changes for this race. His helmet features George Washington’s Profile, just like that of the dollar bill.

Brad Keselowski stole the social media stage when he tweeted from his car during a red-flag occurrence in the Daytona 500, so it seemed fitting that he joined the executives from NASCAR and Twitter as they announced a new partnership that will bring a unique racing perspective to the average fan. The tag #NASCAR is where all the excitement will be starting with the June 10 Pocono 400. Race fans can expect a unique experience with access to drivers and behind the scenes information.

“I think Twitter has a large effect on myself personally and the sport,” said Keselowski. “It is a great opportunity to combine technology and give more access to our fan base. I get on Twitter and I love to tweet.”

Twitter, which boasts 140 million active members, will use an editorial team and a special algorithm to bring the best content to the best interactive fans in Motorsports. Keselwoski along with Camping World Truck Series Driver Nelson Piquet Jr. both embrace twitter. Other drivers are encouraged to join the platform and help enhance the experience for fans.
___

As Labor Day Weekend approaches and the backyard barbeque becomes evident, check out the unique flavors of Atlanta Motor Speedway. The track is introducing the flavors of Coca Cola and Georgia peaches to the track with a unique twist. Levy Restaurants and Chef Frank Abbinanti inspired the full line of menu items. Coca Cola Racing Drivers Greg Biffle and Joey Logano tried the special menu items during the All-Star event. To cast your vote, visit Atlanta Motor Speedway’s website. Menu items for the Advocare 500 include Coke Zero Braised Beef Tacos, Coca-Cola Chili Dog, French Fries with Coca-Cola Dipping Sauce, Georgia Peaches and Sprite Elephant Ear and Cherry Coke BBQ Pork Sandwich with Vidalia Onion Rings. www.atlantamotorspeedway.com/vote “In racing, somebody always loses, but you can’t lose with any of this,” Biffle said. “I’m going with the taco and the dog as my favorites, but none of this is bad.”
—

Grow One, Save a Million initiative is being endorsed by Kevin Harvick and the Budweiser team. If the team begins to look scruffy, please forgive them as they attempt to help save a million gallons of water for World Environment Day June 5. Race fans and media members are invited to begin saving water as well. For more information and to make your pledge, visit Facebook.com/Budweiser or text GROW ONE to BEERS (23377) It is estimated that if a man does not shave for two weeks, he may save up to 70 gallons of water.

Three-time Grammy nominee and reigning CMA Male Vocalist of the Year Blake Shelton will perform a free concert for ticket holders prior to the All-Star Race Saturday night in Charlotte. Race fans looking for a prime location to see the show, can upgrade their ticket for $20.

“I cannot wait to help kick-off one of the biggest All-Star events in pro sports,” said Shelton, “we are going to party.”

The Fifth Annual Pennzoil Ultimate Victory Burnout Challenge will feature drivers honing their handling skills. Expect some rubber to be laid down. Defending winner Kasey Kahne and 2010 winner Joey Logano will be joined by AJ Allmendinger, Brad Keselowski and Clint Bowyer. Race fans on site at CMS will text their votes to determine the burnout winner. The winner receives $10,000 for their designated charity and a secured spot in the 2013 competition.

On track activities will also include a Global Rally Cross Demonstration. The season opener for Rally Cross will be held on May 26 in conjunction with the Nationwide event at Charlotte. Four-time Rally America champion and sports legend Travis Pastrana will compete in both events.

Ty Dillon claimed the Keystone Pole Award in his No. 3 Bass Pro Sports Chevrolet for the Camping World Truck Series. Dillon’s lap of 181.616 mph secured the pole in the 10th annual North Carolina Education Lottery 200. This is his fourth top-10 start of 2012. He will be joined upfront by Justin Lofton and Joey Coulter.