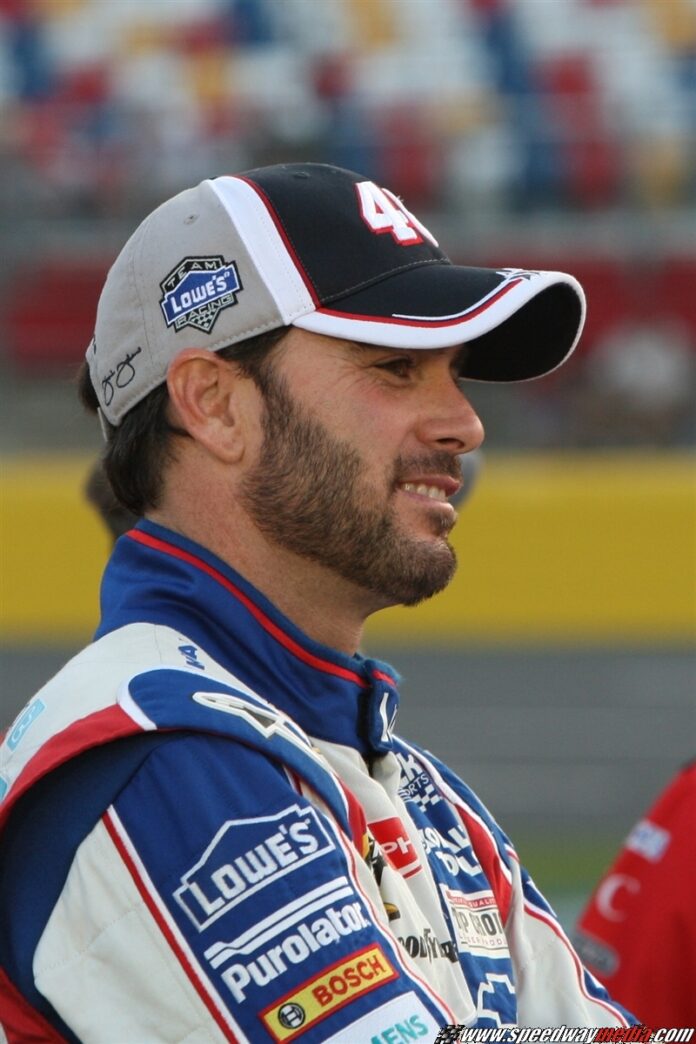 [/media-credit]Coming off of his win the Sprint All-Star race, Jimmie Johnson qualified for the Coca-Cola 600 in the third position.

Johnson says the lap was 90 percent, as turns three and four felt good while turns one and two were off.

“You just never know really what that grip level is going to be,” he adds. “I went in there committed; I just didn’t have the grip that I hoped to have once I landed. “But we have a great race car. I’m just very proud of everybody on this Lowe’s Chevrolet. The cars have been very fast and really great couple of weeks for us and we hope to keep things rolling.”

This marks his 17th top 10 start in 22 races at Charlotte Motor Speedway.

“Just real proud of where our equipment is going,” Johnson says. “I always have been able always race better than I qualify. Our qualifying effort this year has been improving week in and week out.”

In 11 races so far this year, Johnson has qualified top-five twice and in the top-10 six times.

“I can’t express enough how important that is on pit road and late in the race,” Johnson continues. “It just opens up so many options for you on two versus four tires. Good in’s and out’s to your pit stalls. I’m very proud of the effort today.”

The car that the No. 48 Lowes team decided to bring to Charlotte is a different car than the car they ran in the All-Star race, due to the timing of when it had to be ready.

“We just couldn’t get it turned around in time,” he says. “I guess we got the car back Tuesday afternoon. With us checking in and needing to be here Thursday, there wasn’t enough time, if it was a Friday, normal Friday qualifying session we could have. But this car was different it took a different set-up from a qualifying stand point.”

Johnson says he noticed the differences with the springs and the lines that he has been running on track.

Johnson has been riding a wave of momentum lately as he comes in looking for third win in a row, counting both last week’s All-Star race and the Bojangles Southern 500 at Darlington Raceway. The win at Darlington marked the 200th Sprint Cup win for car owner Rick Hendrick.

“I have been sitting up here telling all of you that we are close and it is coming and look at the laps led and all that stuff,” he says. “I’m glad to be able to back up what I have been talking about over these last few months.  It really just boils down to the hard work that has come through the engine shop, chassis shop, our engineering staff and the crew chiefs.”

Johnson says that his success as of late, along with Dale Earnhardt Jr. winning the All-Star Showdown and a segment during the all-star race, have boosted the guys in the No. 48/88 shop.

“The No. 48 and No. 88 shop there is a lot of excitement,” he says. “Junior won a couple of times the other night.  The wins we have had, there is excitement in the No. 5 and No. 24 shop, but those guys have had some terrible luck.  As a group we are just hopeful that luck will leave them alone, they will be able to finish where they deserve and where they have been running in these races.  But, the company is still on a high from the 200th win, the All-Star win just kicked that up another notch.  I’d expect all four cars to be real strong.”

Despite starting up front on Sunday night, Johnson knows he will get caught back in traffic due to the varying pit strategies as people will gamble with taking two tires or just fuel for track position.

“I want to be smart and if I can work on my car in traffic a little bit in practice just because at some point there is going to be that deal where you lose track position,” he says. “It is so important. If you can’t fight your way through there and pick up some spots then you are a sitting duck.”

Johnson will enjoy the clean air at the start of his 22nd race at Charlotte Motor Speedway behind the Richard Petty Motorsports teammates.

“I’m happy for those guys, it’s a smaller team that is working hard and I know it’s a big day for them,” he says. “I wish it was us, but we will come back and learn a little more Saturday and go racing.”