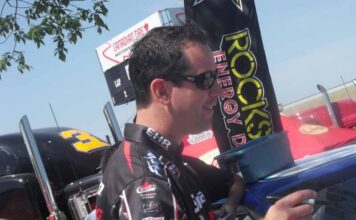 “It was a great weekend last weekend, as far as fans, the racing goes and Canadian Tire,” Hathway says. “With Vortex being the title sponsor, it was good for us. we had a good finish. We qualified sixth and finish sixth so that was a good start for us as well.”

During the off-season, the track went under new ownership and went through some changes. Hathaway says the improvements they made were great and can’t wait to see what else they got planned.

“They’re also talking about another NASCAR series racing there so excited to see if that happens,” he adds.

Hathaway is looking for a solid season after finishing ninth last year in points. Hathaway raced the majority of the year with a broken arm as he broke it in the first race of the season last year at CTMP. He says for this year, he is hoping to finish top three in points while winning a couple races.

This weekend, the series heads to Circuit ICAR, which will mark the second race at the track in Quebec for the NCAT series. Last year, Hathaway finished 15th, though that was due to the arm injury. In 2010, he was able to score five top 10s in six road course starts.

Following ICAR, the series switches gears as they will have their first oval race of 2012.

I know some guys are looking forward to that,” Hathaway says. “We’re ready to go. The car just got decalled the other day; it’s going to match the road course car, look the same. I know we got a lot of comments – looked sharp last weekend. Can’t wait to get started.”

Hathaway got started in racing as a kid racing go-karts.

“I used to run around D.J’s track at his truck shop in St. Thomas when I was a kid,” he says. “So started there and worked our way up.”

He started with Delaware’s Enduro class, before moving up to the Super Stock class where he won a division championship. He then moved up to Late Model and began traveling across the country to different tracks.

“Got a lot of seat experience, met a lot of people, kind of got the media attention to get hired by Ed Hakinson Racing,” Hathaway says. [/media-credit]Hathaway got back to his Late Model roots last week as he competed in round one of the McColl Racing Enterprises Pro Series at Sunset Speedway. While he did score a qualifying race win, the race didn’t go well as Hathaway got wrecked on lap 42 by Jesse Kennedy.

The driver from Appin, Ontario calls Jeff Gordon his racing hero due to Gordon’s success, among other things.

“When he started, he started winning, drove a chev, had a cool paint scheme and had a cool mustache for a 22-year-old,” Hathaway comments.

For getting through a roller coaster season, it’s all about taking it easy even when frustration sets in.

“Don’t get too hard on yourself when something happens and takes the highs and the lows and average them throughout the year,” he says.

Hathaway adds there’s a lot of traveling with the different tracks they go to so it’s all about figuring where you are.

“Keep the team focused, keep myself focused and just have one goal and aim for it,” he says.

SM Staff
Previous articleHot 20 over the past 10 – When it comes to hot, NASCAR currently is not
Next articleToyota NNS Dover Notes & Quotes Ryan Truex