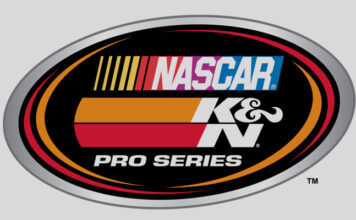 [/media-credit]MOORESVILLE, North Carolina (June 6, 2012) – – The NASCAR K&N Pro Series East (NKPSE) tour may be heading to Gresham (Ga.) Motorsports Park this weekend for the running of the Slack Auto Parts 150 but many are still reflecting on last weekend’s race at Bowman Gray (N.C.) Stadium.

“I had high hopes for Bowman Gray after we tested there,” recalled Rhodes. “When we unloaded, we were solidly in the top-15 but we knew that our No. 37 Chick-Fil-A Chevrolet Impala was going to be superb on the long runs. We qualified 14th and that’s about where we expected. We had a scuffle on the first lap, recovered from another mishap which cost us a lap and then paced ourselves back up into the top-five, avoided the chaos at the end and came home with a fourth place finish, I was ecstatic.”

Car owner and mentor Jeff Spraker was absolutely delighted with the performance of the 18-year old this past weekend. “Harrison definitely has a bright future ahead of him and it was an absolute pleasure to have him be a part of the Spraker Racing Enterprises family. He had a lot on his plate to embrace, especially at a place like Bowman-Gray, but despite the challenges we faced during the race, he never lost his composure, stayed focused and that allowed us to recover and finish fourth. It’s one of the highlights of our season thus far. Hopefully we can have him back behind the wheel of one of our cars real soon.”

Rhodes, a former competitor in the CARS Pro Cup Series expressed interest in returning to the NASCAR K&N Pro Series East but said it was contingent on sponsorship. “We’re going to work hard and try and put some things in place so we can run with Jeff and his group. They are a first class bunch and I had a blast – hopefully I’ll be back with them again soon.”

This weekend, Spraker Racing Enterprises will turn their attention to GMP, another high-class short-track where the veteran team will field two cars with Chad Finchum returning to the driving duties of the No. 37 and Martinsville Speedway president Clay Campbell steering the No. 08 Mountain Dew Chevrolet Impala.

“Gresham’s an incredible facility and we’re looking forward to having a good weekend there too,” said Spraker. “Thanks to Harrison, he has the shop literally riding on cloud nine and that’s the type of momentum you like to have going into the next race. Hopefully both Chad and Clay have good runs to keep our momentum alive.”

The Slack Auto Parts 150 (150 laps / 75 miles) at Gresham (Ga.) Motorsports Park is set for this Saturday, June 9th with a set liftoff at 8:30 p.m. The event will be tape-delayed on SPEED with a soon-to-be determined airing date.

Learn more about Harrison Rhodes by clicking on to harrisonrhodesracing.com.

Additional input on Chad Finchum can be viewed by logging onto ChadFinchum.com.