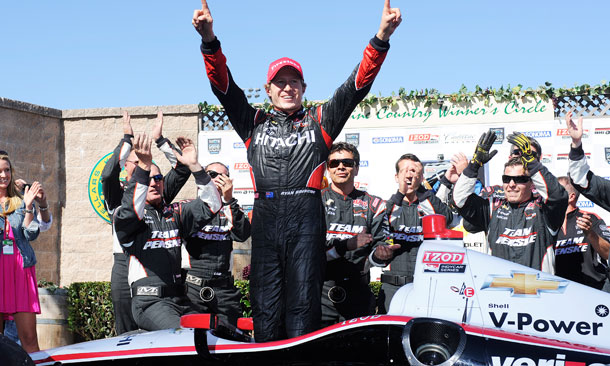 With another chapter in the 2012 IZOD IndyCar Series Championship complete we are now beginning to see the final stages of the campaign draw even closer.

Ryan Briscoe capitalized on a great opportunity Sunday afternoon at Infineon Raceway to earn his first win in over two years.  Will Power dominated the first half of the race, but on lap 64, things went amiss.  As Power was in the pits, a caution flew for a collision with Josef Newgarden and Sebastian Bourdais.  The pits remained open under caution and Briscoe was able to pit the next time by.  Due to an unknown mishap in Powers pit stop, Briscoe exited his stall and beat out his Penske Racing teammate to the blend line, inheriting the lead. [/media-credit]From then on, Briscoe held off a charging Will Power for two more restarts, enabling himself to enter victory lane for the GoPro Indy Grand Prix of Sonoma.

“It feels so good to win here in Sonoma.  I got my first ever pole here back in ’05 and I’ve been so close the last sort of 4 years, 5 years and finally to get the win.  It was a good battle at the end there with Will and Dario.”  Briscoe stated after the race.

Power’s #12 Verizon Wireless Chevrolet might have come across the finish line second after spending most of the day in the lead, but the Australian racer still heads to Baltimore on a positive note.  Coming into the Sonoma round bearing only a 5 point lead over Ryan Hunter-Reay, Power exits wine country with a 36 point advantage over Hunter-Reay.

“It was a good day for us, points wise.  I feel bad for Hunter-Reay, he obviously got taken out.  That definitely hurts considering he had such a good drive up to third place.”  Says Power.

While Power leaves Sonoma with momentum, Hunter-Reay enters Baltimore in desperate search of it with only two rounds remaining in the championship.

Since Hunter-Reay’s summer hot streak of three consecutive wins, the Andretti Autosport driver has posted a best finish of 7th in Edmonton.  Of the three races since his last win (Edmonton, Mid-Ohio, and Sonoma) two of them have been DNF’s.  Hunter-Reay has seen his 34 point lead in the championship completely reverse course, he now trails the lead of Will Power by 36 points.

The frustration was very evident on Hunter-Reay’s face after the race.

“I can’t tell you how frustrated I am after the engine problems last week.  I ran so hard all day, I pushed so hard to get from seventh to third.  We had a great car for the end and it’s just usual Tag, he’s thinking right in front of himself rather than 10 feet, 15 feet ahead. ”

Alex Tagliani was not hesitant to stand up to the events that took place on track when questioned about it after the race.

“I take full responsibility. You know, I’m out there racing and I had a good run on Dario…It’s not that I’m not thinking about it (the championship) but I’m not going to lift either just because I don’t want to pass anybody and I’m afraid, and then get passed!”  Tagliani said.

The series now heads straight to the east coast for the Grand Prix of Baltimore around the streets of Camden Yards this weekend, September 2nd.  Two weeks after that will be the season finale at Auto Club Speedway in Fontana, California with the MAVTV 500.

Will Power will be the man everyone is watching this weekend as he looks to claim his first IndyCar Championship.  The main storyline to follow in the coming races will be if Power can shake the monkey off his back.  Recall, in 2010 and 2011 Power finished second in the points behind Dario Franchitti.  In 2011, the deficit was 18 points.  In 2010, a mere 5 points separated Power from his first title.  Both the previous two seasons Will earned two more victories than the eventual championship winner, Franchitti.