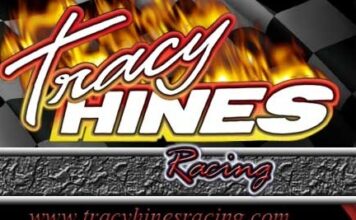 New Castle, Ind.—Sept. 23, 2012— There is not a dirt track on the USAC Amsoil National Sprint Car Series schedule that Tracy Hines has been more prolific at than the famed Eldora Speedway. The native of New Castle, Ind., continued his proficiency in a sprint car at the half-mile during the 4-Crown Nationals on Saturday, Sept. 22, earning his second win of the season at Eldora and the ninth of his career at the Ohio oval aboard a sprinter.

Hines started on the pole for the 30-lap main event and quickly jumped out to the lead at the drop of the green flag. He would encounter a late race challenge from Dave Darland, withstanding a slide job from the fellow veteran on the last lap. Hines would lead all 30 laps en route to the victory aboard his MP Environmental DRC.

“It always feels great to win at Eldora, especially during 4-Crown,” said Hines. “I knew Dave (Darland) was back there and he’d be giving it everything he had. I got him on the last lap earlier this year here, so I figured there would be a slider coming on that last lap. We’ve had a great set-up all year for Eldora and this win is for everyone that helps us out and sticks behind out team. It never gets old to win at Eldora.”

Early in the 30-lap contest, Hines opened nearly a full straightaway lead on the second-place running car. A couple of red flags slowed the race and bunched the field back up, with Hines using a strong restart each time to maintain the top spot. On the final circuit, Darland tried a slide job in turns one and two, but could not make the pass stick, allowing Hines to use the momentum he had gathered to pull away by a few car lengths and cross the finish line first.

“After being so fast in the midget and having some engine trouble while up front early in that race, it definitely feels great to pick up a win in the sprint car,” shared Hines. “I’ve been pretty fortunate over the years during 4-Crown to win a number of times in a sprint car and right now the sprint car division is probably the toughest to win in, so that makes this victory even more special.”

The 2002 USAC Amsoil National Sprint Car Series champion began the sprint car portion of the 4-Crown Nationals by recording the eighth-fastest lap in time trials of the 37 drivers that took to the half-mile. Hines won the fourth eight-lap heat race to earn a spot in the main event, and after the feature-race starting line-up inversion, he found himself on the pole.

Hines wrapped up the trio of races on Saturday night with a sixth-place showing in the USAC Traxxas Silver Crown 50-lap event in the Lightfoot Racing No. 16. He was fifth-fastest in time trials of the 17 entrants that hit the track, which put him on the inside of the third row for the A-Feature. Hines ran among the Top-Five for a large portion of the 50-lapper, and was engaged in a spirited duel for third for a number of laps with Bobby East and Robert Ballou. With the sixth-place finish, Hines moved up two spots to seventh in the USAC Traxxas Silver Crown Series championship standings.

In the USAC Mopar National Midget Series 25-lap main event at Eldora, Hines was running among the Top-three at the start, when engine trouble forced him to the pit area on the second lap, ending his night. He opened the midget portion of the 4-Crown Nationals by recording the second-fastest lap in time trials of the 17 drivers in attendance. He followed that up with a win in the second eight-lap heat race. Hines, who has won three times in his Parker Machinery Toyota-powered Midget this season, is currently second in the USAC Mopar National Midget Series point standings.