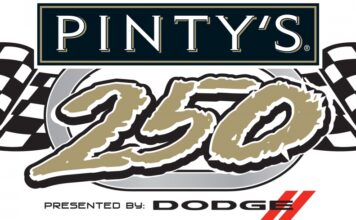 September 22, 2012. Fraserville, Ont. – In spite of being forced to take a provisional starting position and a few other speed bumps during the final round of the 2012 NASCAR Canadian Tire Series season, Jarrad Whissell was proud of his #44 SMS Equipment/Komatsu Chevrolet’s team in the Pinty’s 250 at the Kawartha Speedway.  The team showed grit and determination throughout the final event.

Whissell had a good practice, but it didn’t quite translate in qualifying. Despite running 12th quickest, he didn’t make the race on time and was slated as a provisional starter. But Whissell says he’s to blame, not the vehicle.

“The car was really good in practice, we had a great new set up that Mike McColl put on the car,” he said. “But to really take advantage of it in qualifying, you have to drive the car deep into the corners and I was too tentative.”

Once the contest kicked off, Whissell ran into more trouble when he got collected in an early accident and the vehicle sustained heavy front-end damage.

“It was really disappointing to suffer so much damage that early,” he said later.

The team also discovered that he broke a spindle along with the exterior front-end damage. Regardless of the overwhelming destruction, the crew worked to keep the #44 SMS Equipment/Komatsu Chevrolet alive on the track and finish up the race.

“I got out of the car and took off my helmet, but my crew was determined to get us back in the race,” he said. “They deserve a ton of credit for their effort, they got me back out on the track.”

#44 chugged along for the rest of the race as best as he could, riding around and staying out of the way. Whissell eventually crossed the finish line in 25th place.

Whissell says the Pinty’s 250 was a let down, but is already cheerfully looking forward to next season.

“It is disappointing way to end the season with that result, but I love the car with the new set up, can’t wait to get back.”

Whissell earned a collective 180 points among the 7 races he participated in, including 1 top-ten finish.

Follow the progress of the team and help support the Children’s Miracle Network through the team website www.jarradwhissell.com  You can also support the Children’s Miracle Network by Following Whissell on Twitter or liking Whissell Motorsports on Facebook.  The team will donate $1 for each twitter follower and Facebook like they receive between now and December 2012.  The donation will max out at half of the price money Whissell receives this Season in the NASCAR Canadian Tire Series. Follow Jarrad on twitter, @JarradWhissell and like them on Facebook, Whissell Motorsports. Fans can watch all of the NASCAR Canadian Tire Series races again this year on TSN.