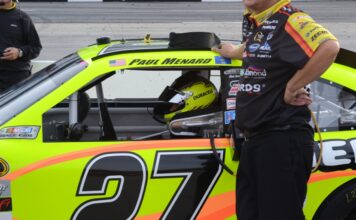 [/media-credit]Paul Menard’s season has had it’s ups and downs. The season started off solid with a sixth place finish at Daytona. Though the team stumbled at Phoenix, they followed it up with two more top tens. As the season progressed, the roller coaster trend continued with many finishes in the high teens to lower twenties being the norm.

It seemed the team had turned a corner at Kentucky and performance started to improve. Disaster struck at Michigan however, when the No.27 Menards Chevrolet failed post race inspection. The car was found to have illegally modified frame rails. Crew Chief Slugger Labbe was then suspended for six weeks along with two additional crew members and fined $100,000. Labbe was able to remain atop the box for two more weeks while the team appealed the penalties, and Menard completed a run of three straight top ten finishes. The three member panel denied the appeal of the suspensions. Team owner Richard Childress decided not to take the next step to make a final appeal.

We now know that the decision to not make the final appeal was based on the upcoming schedule, Childress had a master plan. He knew that Labbe would return for the Kansas week and that NASCAR had a test session scheduled for that week. Labbe who had spent his suspension weeks working on new ideas was able to return to the track and participate in the test and utilize a few ideas he had been working on at the shop. The plan seems to be working. Menard’s finishes without Labbe were a solid 12th at Loudon, but followed that up with a 22nd at Dover, 28th at Talladega, and 27th at Charlotte. Upon Slugger’s return, the team came out strong at Kansas, led six laps and finished third. Whatever Labbe found is definitely showing some improvement in performance. The success seems to be continuing at Martinsville, Menard was sixth fastest in practice and qualified ninth for Sundays Tums 500 at the legendary track.

Team members were upbeat when I asked about the recent success, “It’s always nice when you get the team all back together, you usually try to build the team as a whole, so when you take away from that, something’s missing, everybody steps up and tries their best but it’s not routine I guess, we are creatures of habit, and it’s nice to have everybody back, not just Slugger but the engineer and the car chief, it’s a better team when you’re back at a full team again.”

Menards three previous finishes at Martinsville were 38th, 24th, 26th. A solid run this weekend could be a strong indicator that Labbe’s suspension may have actually proved valuable to the team.

The No.27 Menards Chevrolet currently sits 16th in the Sprint Cup points with eight top tens, and one top five. The team hopes to finish strong, carry the momentum into next season and hopefully contend for the championship.

Roger Holtsclawhttp://www.nationalmotorsportsnetwork.com
Roger has over 24 years experience as a mechanic and crew member in NASCAR at many levels including Cup, Nationwide and Truck Series. He has also competed as a driver at many short tracks around the Southeast including one start the USAR Hooter's Pro Cup Series. Roger is now embarking on a motorsports journalism and photography career and is co-owner of HMP Photo. Follow me on Twitter @rogerholtsclaw Email me: roger@speedwaymedia.com
Previous articleDale Earnhardt Jr. felt foolish for sitting at home, but glad he took the time off
Next articleCHEVY NSCS AT MARTINSVILLE TWO: Matt Borland Press Conf. Transcript