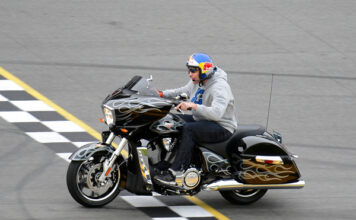 DAYTONA BEACH, Fla. (Feb. 22, 2013) – Roush Fenway’s Travis Pastrana will make his official Daytona NASCAR debut in Saturday’s Nationwide Series race, at the World Center of Racing, but actually got in a little track time early this week when he raced FOX’s CAMCAT, a unique suspended HD camera system that spans across the front stretch of the famed Daytona International Speedway.

“It was cool to get onto the track and race FOX’s new camera,” said Pastrana. “It’s a very unique camera angle and I think they’ll get some great shots with it.

Pastrana, mounted on a 2013 Victory Cross Country Edition motorcyle, reached speeds in excess of 110 mph and was able to outduel the ‘Cat’. Volusia Motorsports, a local Victory Motorcycle Dealer out of New Smyrna Beach, Florida, provided the bike. For more info visit www.victorymotorcycles.com.

Click here for full photo gallery of the ‘race.’

Sunday’s Daytona 500 is set for 1:10 p.m. and will be televised live on FOX.  RFR will field three entries in the race, with Greg Biffle, Carl Edwards and Ricky Stenhouse Jr. each looking for Roush Fenway’s second straight win in the historic event. An RFR driver has won three of the last four Daytona 500s.