Regan Smith in the midst of his best season 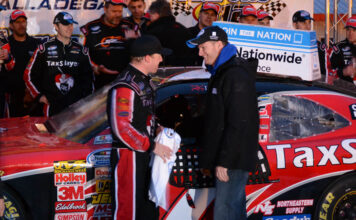 Regan Smith is having the best season of his NASCAR career. Smith started competing in the Nationwide Series in 2002. After competing in a few part time seasons, he competed full time in 2006 for Rensi Motorsports. He finished 20th in the standings at the end of that season.

Smith then began competing in the Sprint Cup Series in 2007 driving the #01 US Army Chevrolet for Bobby Ginn. He only started seven races that season, only leading one lap, but perhaps more importantly at this stage of his career, he completed 99% of his laps.

As things progressed, Smith eventually found himself driving for Barney Visser and his Furniture Row Race team. After a part time first season in 2009, the team went full time in 2010.  After, somewhat of a lackluster year finishing 28th in the points with no top ten finishes, 2011 improved. Smith actually led 36 laps, and had five top tens, with his first Sprint Cup victory coming at Darlington. Smith’s win at the legendary track earned him a ton of attention. He seemed to be on his way to the next level.

2012 did not bring the success that everyone expected. Late in the season, the team decided to release Smith in favor of former series champion Kurt Busch. As they say, when one door closes, another opens. The release from Furniture Row Racing could be the best thing that ever happened to Smith. That very weekend, Hendrick Motorsports driver Dale Earnhardt Jr was diagnosed with a concussion after a wreck at Talladega. Smith was pegged to fill in for the series’ most popular driver in the #88 Amp Energy Chevrolet.

Smith suffered an engine failure in his first start. However, he turned in an impressive seventh place finish at Kansas a week later. In the season ending race at Homestead, Dale Earnhardt Jr’s Nationwide Series team, JR Motorsports, decided to give Smith a chance in their Hendrick Cars.com Chevy. Smith immediately found success, winning his only Nationwide start of the season.

Smith’s performance earned him the chance to replace driver Danica Patrick, who was headed to the Sprint Cup series, in the team’s #7 Chevy Camaro. The partnership between Smith and JR Motorsports has been an instant success. After a 14th and 11th place finish in the first two races of the season, Smith has been on a tear, stringing together ten straight top ten finishes. Included in the string of top tens is a fascinating win in almost dark conditions at Talladega Superspeedway. Smith has an average finish of 7.2, not bad considering the number of Cup regulars that seem to infiltrate the series on a regular basis.

This amazing string of finishes has accomplished another feat for Smith. He is the first JR Motorsports driver to lead the series points. Heading into the race at Michigan, Smith has a strong 23 point lead. Smith commented on his season Friday saying, “It’s been a good start to the season for us with the TaxSlayer Chevy. We certainly want to keep our momentum up. Ideally, we can build on our points lead this weekend.”

Smith also contributed a lot of the team’s success this season to crew chief, Greg Ives, stating, “I’ve enjoyed working with Greg a lot this year. He is as even keeled as they come. Nothing seems to faze this guy. If we’re having a bad day on the racetrack, he is the same tone as if we just won the race. He doesn’t let anything get to him, which in turn helps me because I have a tendency to get wound up very easily. He does a good job of keeping me focused and calm.”

Though, his record at MIS is not that great, he has an average finish position of 25.5 and a best finish of 20th, Smith started off the weekend at MIS by posting the eleventh fastest lap in final practice.  The team was a little off in qualifying. The #7 TaxSlayer Chevy Camaro will take the green in 20th place on Saturday. Given his strong performance this season and the confidence he obviously has in his team, Smith should be able to find his way to the front, and protect his points lead.

Roger Holtsclawhttp://www.nationalmotorsportsnetwork.com
Roger has over 24 years experience as a mechanic and crew member in NASCAR at many levels including Cup, Nationwide and Truck Series. He has also competed as a driver at many short tracks around the Southeast including one start the USAR Hooter's Pro Cup Series. Roger is now embarking on a motorsports journalism and photography career and is co-owner of HMP Photo. Follow me on Twitter @rogerholtsclaw Email me: roger@speedwaymedia.com
Previous articleNewlywed Bayne hoping to carry momentum to Michigan
Next articleJason Leffler remembered and honored as racing goes on in Michigan