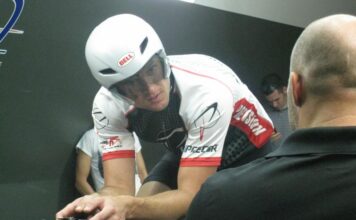 This edition of NASCAR ‘Behind the Scenes’ focuses on driver Josh Wise, who instead of enjoying a rare weekend off, will be participating in a triathlon.

The 30-year old driver of the No. 35 MDS Transport Ford for Front Row Motorsports will swim, bike and run 70.3 miles in his first Half Ironman in Racine, Wisconsin this weekend.

For Wise, this triathlete competition all started as somewhat of a joke with fellow driver Scott Speed, who initially turned him on to cycling, one of Speed’s favorite training regimens. And Wise has been driven to compete ever since.

“A friend of mine Scott Speed got me into cycling three years ago as a way to train for the race car and preparing for long stock car races,” Wise said. “It really started as a joke between Scott and I when we were riding that we were going to jump off our bikes and jump in the river we were riding over to swim.”

“And it kind of turned into a joke that we were going to do a triathlon,” Wise continued. “Then, we did one and I really enjoyed it.”

“Every weekend off I’ve had in the last three years I’ve squeezed in a triathlon,” Wise said. “So, I’m just continuing the trend here this weekend and increasing the distance I’m doing.”

“It’s a longer race,” Wise continued. “My ultimate goal is to do a full Ironman on December 1st in Mexico.”

“And then I might just take a little break after that one.”

Wise admitted that training for his first Half Ironman triathlon has been as grueling as the NASCAR race schedule. In fact, he has had to give up other hobbies, such as golf and remote control racing, in order to put in the over 20 hours per week training regimen that he currently is utilizing in preparation for the upcoming competition.

“You get a little lost in it because if someone told me that I’d train as much as I do now, I wouldn’t believe them,” Wise said. “Whenever I do things, I can’t just do them to have fun.”

“I go all out with the best bikes and the best trainers,” Wise continued. “So, it does become all-consuming for me.”

While Wise has devoted an incredible amount of time to training for these intense competitions, he struggled to put into words what being a triathlete means to him and what possesses him to be so driven to participate.

“Definitely the thrill of the actual triathlon races is unexplainable as far as the rush that you get with them,” Wise said. “I also enjoy the intricacies of it and the preparations for it.”

“It’s not just about being fit,” Wise continued. “Last week, I got to go the wind tunnel with my bike.”

“And you also have to pay attention to nutrition.”

In fact, just as in his race car, fueling is one of the most important intricacies of the Ironman triathlon competition.

“That’s one of the really tricky parts is dialing in your fueling,” Wise said. “Obviously, you’re exerting yourself really hard throughout the race.”

“I’ve worked hard to try to refine my nutrition,” Wise continued. “What I’ve come up with is I have all my calories I will take, 350 per hour, in a small water bottle in a gel form.”

“So, I time that out for every 15 minutes so I’ll take a swig regularly to keep hydrated and fueled,” Wise said. “My fuel mix has electrolytes and protein that are very carefully calculated.”

“It’s like figuring out all the moving parts of a race car.”

There are certainly other crossovers between the world of Ironman competition and NASCAR racing, from the physical fitness to the mental focus. And Wise admitted that he definitely has seen a difference when he is behind the wheel thanks to his rigorous training initiatives.

“There is no doubt that the demands of racing on our body are tremendous and the amount of focus needed takes a lot of you,” Wise said. “The fact that I’ve got to a point with my fitness that fatigue is removed is definitely a benefit.”

“I can just focus on driving and not worry about how tired or dehydrated I am instead.”

“It’s interesting because there is a huge mental element to the training and to racing,” Wise said. “There are times during the week when you’ve done a three-hour swim and then you have a four-hour bike ride on the schedule.”

“It’s a mental struggle of pushing through and that’s another thing that intrigues me,” Wise continued. “It’s the challenge of overcoming the fatigue and pushing through that is a major accomplishment.”

Another similarity between Ironman triathlon competitions and racing is that the athlete is not only competing with others but also with him or herself.

“There are over 2,000 people registered for the triathlon so you will have competition,” Wise said. “You will swim side-by-side so you’re always racing other people.”

“But you really are just racing yourself,” Wise continued. “In a car, you’re racing the track and trying to dial your car in, but you are also racing other people.”

“I see the same elements in the triathlon, where you are racing yourself but you are also racing others,” Wise said. “Like in the swim, you can draft and you want to get behind the right people.”

“So, just like in racing, you are competing with others as well as yourself.”

Although Wise has set realistic goals for himself, however, just as with any NASCAR racer, the desire is always there to win.

“I’d want to win it but I’m just not there yet,” Wise said. “There are pro level athletes in this sport and it’s ridiculous how fast they are.”

“So, for me, I know where I’m at and I set hard goals and that’s what I focus on,” Wise continued. “It will be a matter of execution within my wheelhouse.”

“Right in five hours is my goal and if I can be there, I’ll be really happy.”

Wise has already scored wins in his triathlon endeavors, both with his family and for a charitable cause as well.

“The other thing that is cool is that I’m an encouragement to others,” Wise said. “I’ve seen my family become healthier and more fit.”

“My wife is training for a half-marathon right now and my father and brother got road bikes,” Wise continued. “So, everybody is trying to be a little more fit, so it’s kind of cool.”

“I’m also racing for a cause,” Wise said. “It’s a partnership with K-Love Radio and World Hope called ‘Revival of Detroit.’

“Detroit is a city in need right now and most people don’t realize how bad it is there,” Wise continued. “We are helping to bring awareness to that and that’s what I’ll be racing for there.”

Wise has many emotions about his upcoming 1.2 mile swim in Lake Michigan, his 56 mile bike ride and his 13.1 mile run. But overall, he is just excited to be able to take part in something for which he has trained for years.

“It’s really cool because you work really hard building for it,” Wise said. “It would be like if you were saving money to buy a house and the time came for you to buy it.”

“It’s a long process so when you finally get to the race, you are just super-excited.”

SM Staff
Previous article
Honda Indy Toronto a success, thanks to a tricky track
Next article
Dillon optimistic as second half of Nationwide season begins