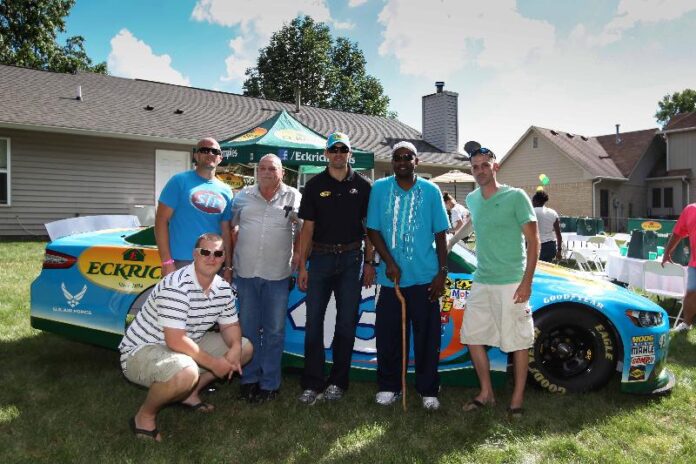 LISLE, IL – (July 27, 2013) – Military families experienced disbelief and then excitement Saturday afternoon thanks to Richard Petty Motorsports driver Aric Almirola, Eckrich and Operation Homefront. A group of military families and wounded warriors, invited by Operation Homefront and Eckrich, were gathered at a private home to enjoy the summer afternoon with games, music, friends and family. When time came to start grilling, however, the party goers realized there was a problem. Their hosts had forgotten a key element to the cookout: the Eckrich smoked sausage.

However, the roar of a race car quickly diverted their attention as Richard Petty Motorsports driver Aric Almirola wheeled the No. 43 Eckrich Ford through the neighborhood and into the backyard to surprise the guests and save the day with plenty of Eckrich smoked sausage on hand. After climbing out of the famed No. 43 machine, the driver unloaded bags of Eckrich smoked sausage for the cookout. In addition, Almirola handed out gift bags filled with Eckrich products, coupons, t-shirts and No. 43 Eckrich team hats for the military guests to give thanks for all they have sacrificed.

Bringing the Smoke: Almirola wheels the No. 43 Eckrich Ford through a fence to surprise military families in Indianapolis

But that’s not all. Almirola then encouraged each guest to look closely through their bag. Inside they found a ticket to Sunday’s NASCAR Sprint Cup Series race at Indianapolis Motor Speedway where they could watch Almirola race the No. 43 Eckrich Ford. The tickets were provided by Eckrich and the cookout surprise was a re-enactment of the new Eckrich commercial featuring both Richard Petty and Aric Almirola that will air Sunday during the pre-race show on ESPN. Click here to watch the commercial.

“We had so much fun shooting our Eckrich commercial, we thought why not bring it to life,” remarked Almirola. “It was cool that we could do that today, especially with our military veterans and their families. It really is an honor to be a part of what Eckrich and Operation Homefront continue to do to give back to them. Our military men and women sacrifice so much to serve and protect our country, but their families do as well. Anything we can do to support and thank them goes a long way. We hope they enjoy their day at the track.”

This surprise is part of the ongoing efforts of Eckrich, part of the John Morrell Food Group, a subsidiary of Smithfield Foods, and Operation Homefront to support and thank military men and women and their families. Earlier this year the Operation Inspiration campaign was launched to thank, honor and support military families, the heroes behind our heroes. The campaign includes the Operation Inspiration TV special hosted by Al Roker which debuted in June and will air in syndication in markets across the country throughout the summer.

“As Aric mentioned, our new commercial is a lot of fun, and we wanted to re-create that experience, while also giving back to our military families,” said Chuck Gitkin, vice president, marketing, innovation and R&D for the John Morrell Food Group. “We are proud to work alongside Operation Homefront and Richard Petty Motorsports to thank and support these very important people like we did today.”

Almirola and the No. 43 Eckrich Ford will race at the famed Indianapolis Motor Speedway on Sunday, July 28. Television coverage will begin at 1:00 p.m. ET on ESPN.

Founded by Peter Eckrich in 1894, Eckrich has a rich heritage starting from a small meat market in Fort Wayne, Ind. Through it all, Eckrich meats have been recognized for their great taste and supreme quality, craftsmanship, care and pride. For more information, visit www.eckrich.com or www.facebook.com/EckrichMeats

A performance and marketing driven company, Richard Petty Motorsports, co-owned by NASCAR Hall of Famer Richard Petty and successful business entrepreneurs Andrew Murstein and Douglas Bergeron, is one of the most recognized brands in all of motorsports. With a history of over 200 wins and business partnerships with national and global leaders, today the race operation fields two teams in competition in the NASCAR Sprint Cup Series. Aric Almirola pilots the famous No. 43 Ford Fusion with primary partners Smithfield Foods, U.S. Air Force and STP and Marcos Ambrose drives the No. 9 machine with primary partners Stanley and DEWALT. In addition, Michael Annett wheels the No. 43 Pilot Flying J Ford Mustang full-time in the NASCAR Nationwide Series. The team is headquartered in Concord, N.C.