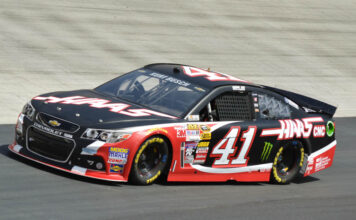 Bristol, TN (March 14, 2014) – The first practice on Friday for the NASCAR Sprint Cup Series Food City 500 was interesting to say the least. Several drivers had trouble and found the wall during the first session – the only practice session before qualifying.

Danica Patrick was the first to find the wall when her No. 10 Go Daddy Chevrolet got loose coming off the corner and bounced off the outside wall, then made contact with Swan Racing rookie driver, Parker Kligerman, who was on his first lap of practice. Patrick’s Stewart-Hass Race team immediately brought out the back-up car. Patrick was 34th fastest at the end of practice.

Kligerman spent much of practice behind the wall, but did manage to complete eight laps before it was over. It is crucial that Kligerman have a qualifying effort this weekend, as this is the weekend that NASCAR reverts to this season’s owner’s points standings to determine provisional starting spots. Kligerman ended up 43rd fastest in the early session.

Another rookie of the year contender, Justin Allgaier, also made contact with the outside wall in his No. 51 SEM Products Chevrolet. Allgaier was on his first lap of practice, and did not return to the track for the rest of the session.

Drivers who had trouble in practice was not limited to drivers of lesser experience. Kyle Busch and Greg Biffle, arguably two if the most talented drivers in the garage area, also spun and made significant contact with the wall. Busch and Biffle both pulled out back-up cars. Busch ended up 19th, with Biffle only managing a 28th place lap in the early session.

Stewart-Hass Racing driver, Kurt Busch did not have any major issues in practice session number one. Busch ran 36 laps, and posted a fast lap of 129.789 mph to place him atop the charts. Busch has an impressive record at Bristol, with 5 wins and 14 top-5’s in 26 starts.

Rounding out the top-5 in practice session number one were – Jeff Gordon, Denny Hamlin, Carl Edwards, and Marcos Ambrose.

Roger Holtsclawhttp://www.nationalmotorsportsnetwork.com
Roger has over 24 years experience as a mechanic and crew member in NASCAR at many levels including Cup, Nationwide and Truck Series. He has also competed as a driver at many short tracks around the Southeast including one start the USAR Hooter's Pro Cup Series. Roger is now embarking on a motorsports journalism and photography career and is co-owner of HMP Photo. Follow me on Twitter @rogerholtsclaw Email me: roger@speedwaymedia.com
Previous articleChevy NSCS At Bristol One: Ryan Newman Press Conf. Transcript
Next articleMarshall’s Madness: Reliving Bristol’s Best And Worst Moments