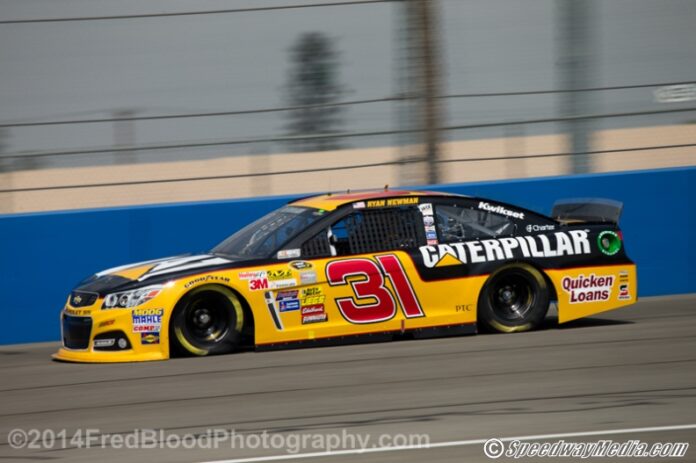 Ryan Newman’s short tenure with Richard Childress Racing has been acceptable, and while winning a race would almost guarantee them a Chase berth, the No. 31 team continues to bank on consistent finishes and reliable results to be granted a spot in this year’s Chase. However, they’re holding a free and loose attitude heading to Auto Club Speedway this weekend.

Newman currently places ninth in the NASCAR Sprint Cup Series standings, and has a season-best finish of seventh at Las Vegas Motor Speedway and Phoenix International Raceway. And this weekend at Auto Club, he’s only hoping to improve that.

“I enjoy (Auto Club).” Newman told the media on Friday. “We’ll see. It’s typically been a fun place to drive and a good place to race and we’ve seen a lot of excitement here, more so than ever did at last year compared to the years before.”

Newman’s career-best placing at Fontana was established in 2004 when he drover for Roger Penske, the finish was third after he began the event seventh. After entering and competing at this race track for 11 races, he still sees flaws in his performance, which could be the reason he can’t find victory lane at this 2.5 mile beast.

“I like this race track. Everybody, for the longest time, compared this track (Auto Club) to Michigan and they were not even close to the same.” Newman said in the media center. “They are entirely opposite. Michigan has been repaved and this is the worn-out California, which it never was. It’s a fun racetrack now. And the most fun it’s ever been in my career of being here for 12-years. I look forward to (running here.”

‘Rocket Man’ is also excited for the multiple grooves this racetrack offers, and how the bumps make the track just that much more difficult to drive.

“(Auto Club’s) got a lot of character. So many race tracks now are repaved and have no character so to speak with bumps and things like that,” Newman explained when asked about how Fontana has changed. “We can move around the race track a good bit and have some fun.”

While fun, and a smile, remained on Newman’s face all during practice and qualifying, when the belts are buckled and the engines are fired you can expect the No. 31 to march to the front, and possibly steal a great finish.