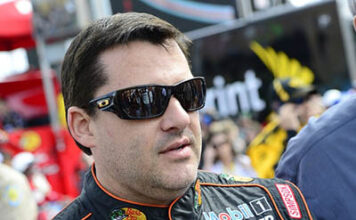 Tony Stewart won the Coors Light Pole award at the Texas Motor Speedway Saturday afternoon with a qualifying time 27.628 seconds or 195.454 miles per hour.  He beat Brad Keselowski’s time of 27.636 at the last second as the third qualifying had expired.  Stewart said, “I wasn’t sure I could on” the car was so fast. “This Chevy was fast today.”  The pole was Stewart’s 15th of his career and second at Texas.

Stewart-Haas Racing was fast as Kevin Harvick shattered the track record with a qualifying speed of 198.28 mph, the fastest average speed ever recorded at a 1.5 mile track for a NSCAR qualifying session.  He was followed by Trevor Bayne, Carl Edwards and Ryan Newman in the first session. Toyota Racing and Joe Gibbs seemed to struggle for time as only Brian Vickers and Denny Hamlin had enough speed to move to that second round. Notable drivers that did not move on to the second round of qualifying (top 24 qualifiers only) were Kasey Kahne (32nd), last year’s pole winner Kyle Busch (29th) and  Matt Kenseth (26th).  Kenseth said after that first session, “We missed the set-up and the track must have picked up speed after that rain shower earlier.”

The second session, which would only qualify the top twelve for the final session, was lead by the Ford of Greg Biffle who topped the charts at 196.235 mph. He was followed closely by the eventual pole winner Stewart, Harvick, Keselowski and his Penske team mate Joey Logano.

In the last session, which only lasts 5 minutes, Keselowski was quite fast until he was nipped by Stewart.

Line Up (per Nascar):

Ed Coombshttp://www.sportshooter.com/coombse
Ed began covering NASCAR for the former Gater Racing News regularly in 2000. He began working with Speedway Media in 2003 by supplying exclusive photos from the races covered. Currently he is the Editor and Assistant Publisher of Speedway Media. He also manages staff and credentialing. With the closing down of Gater News after nearly 50 years he hopes to become a more regular contributor at Speedway Media as a writer and photographer. My Twitter name is @coombsed feel free to follow me I am a member of the National Motorsports Press Association.
Previous articleCHEVY NSCS AT TEXAS ONE: Qualifying Notes and Quotes
Next articleToyota NSCS Texas Post-Qualifying Notes & Quotes