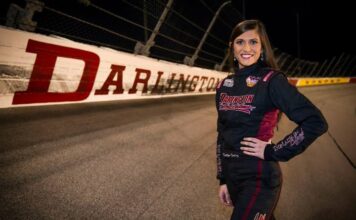 While the ‘Lady in Black’, otherwise known as Darlington Raceway, gets ready to bestow her stripes and tame the best drivers NASCAR has to offer this weekend, the real ‘Lady in Black’ Kaitlyn Bailey is ready to assume her role as the track’s most visible ambassador.

Bailey was awarded the ‘Lady in Black’ honor after competing against over 50 other contestants, from in-person interviews to on-line voting. The college senior thought this would be a perfect fit for her having grown up near the track, along with her family involvement over the generations.

“My mother contacted me about the competition and said that they had announced the contest on the radio station and she’d read about it in the paper and thought this would be right up my alley and that it would be cool,” Bailey said. “We’ve grown up around the track in Darlington and I’ve been to several of the races. It’s always been something that my family has been involved in.”

“My grandmother was on the Miss Southern 500 Committee, which was a pageant they held there many years ago,” Bailey continued. “My mom was also on the committee and it’s just a tradition that continued through my family.”

“Since that’s not around anymore and I always wanted to be involved somehow, I thought this would be a great way to give back to the track because I’ve loved growing up in the area.”

“I sent an application and they had over 50,” Bailey said. “They interviewed all of the applicants and after that narrowed it down to the top five. They announced that at the inaugural Speed & Feed BBQ Cook-Off and there was a short question and answer session on stage.”

“Then they started on-line voting and fans were able to go to the website and cast their votes for their favorite contestant for the ‘Lady in Black’ competition,” Bailey continued. “And I was lucky enough to receive the most votes and here I am.”

While Bailey said that she did a few things to campaign for the honor, she said it came down to someone that could interact with the fans as well as represent the track in the best light possible.

“I think they were focused on getting a good girl, who would be a good example and a good role model that would reflect back on the track well,” Bailey said. “And I think they wanted to get a local girl to get back in touch with the community of Darlington in order to get everyone more involved and interested in the race again.”

“We want support from the community as well as the out-of-town guests,” Bailey continued. “I think they wanted a girl that could draw positive feedback for the track. They wanted someone that was outgoing and would do well around the public. And hopefully that is what they saw in me.”

While Bailey, a senior at the University of South Carolina majoring in political science and minoring in journalism, has been busy representing the track at various events throughout the year, she will be particularly visible as the ‘Lady in Black’ during the Bojangles’ Southern 500 race weekend itself.

And yes indeed, Bailey will be decked out totally in black to live up to her and the track’s famous name.

“They had a custom Simpson racing suit made for me with all of the sponsor logos on it,” Bailey said. “It’s all black with my name across the belt and down one side it says ‘Darlington’ on the side of one leg and ‘Too Tough to Tame’ on the other side.”

So, what is the real ‘Lady in Black’ looking forward to most for her big race track weekend?

“I’ve grown up around the track and always had my favorite drivers but to me NASCAR is a sport that really should be pushed and known more widely among the public,” Bailey said. “I do know a little bit about racing but I’m interested in learning more about how the track functions. There’s a lot that goes into making the race happen. With the race this weekend and seeing all that goes into it, it’s a really outrageous process.”

“Growing up my father was a Dale Earnhardt fan and I’ve always been a fan of that family,” Bailey continued. “So, meeting Dale Earnhardt Jr. will be something. Looking at him and knowing that I’ve watched his dad and now him race and compete, it will be like I’d like to touch him to make sure it’s real.”

“I’ve also been a Jeff Gordon fan and I really liked Dale Jarrett,” Bailey said. “He’s a little older but my mom was a big fan and met him several times. To hear her talk about how excited she was, I can’t wait to also experience that same excitement.”

Bailey admits that she may be a bit awestruck when NASCAR comes to town this weekend but she is firm in wanting all the fans to know that she herself is definitely not too tough to tame.

“I may be the ‘Lady in Black’ but I wouldn’t say that I am tough at all,” Bailey said. “I have a lot of goals for myself but I’m a very easy-going person. I can be a little bit feisty at times if there is something I am passionate or care about.”

“I’m genuinely excited to have this opportunity as the ‘Lady in Black’, Bailey said. “To me, it’s a very high honor that I’m ecstatic to receive.”

“When I entered the competition, I thought it was a great opportunity to represent something that has been such a part of my life. As soon as the race came to town, we could hear the cars on the track from the time trials to the race itself that night. It’s always been something I’ve really enjoyed,” Bailey continued. “So, getting this opportunity to get more involved and see how it all works is so exciting.”

“Not only am I able to be the face of the track that has been close to my heart for so many years, I have no words because I’m so excited.”