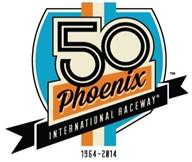 Phoenix, Ariz. – Phoenix International Raceway President Bryan R. Sperber announced today that Paralyzed Veterans of America (PVA) has joined the track’s family of partners.  This Veterans Day, individuals purchasing tickets online or by phone will have the option to support severely disabled veterans and their families through the “$1, $3, or $5…Let Freedom Drive” donation campaign in honor of Veterans Day, November 11.

Fans purchasing tickets to the upcoming Quicken Loans Race for Heroes 500 NASCAR Sprint Cup Series event weekend, November 6-9, can make a donation to Paralyzed Veterans of America through an optional ticket add-on. The donation option is available for tickets purchased online at PhoenixRaceway.com or over the phone at 866-408-RACE (7223). Fans who have already purchased tickets, but would like to donate may also do so by contacting PIR through the same channels.

“We are proud to partner with the Paralyzed Veterans of America and assist them in their efforts to support disabled military veterans during the Quicken Loans Race For Heroes 500 race weekend,” said PIR President Bryan R. Sperber.  “Race fans are among the most patriotic in all of sports, and we are honored to play a role in helping the men and women who served in uniform on Veterans Day Weekend.”

Paralyzed Veterans is a congressionally chartered veterans service organization that has developed a unique expertise on a wide variety of issues involving the special needs of our members – veterans of the armed forces who have experienced spinal cord injury or dysfunction. They are a leading advocate for quality health care for all members as well as research and education on spinal cord injury and dysfunction.

“We’re very excited about the partnership announcement today with Phoenix International Raceway, and we’re thankful for their willingness to support our fundraising efforts,” said Paralyzed Veterans’ National President, Al Kovach Jr. “Veterans Day can sometimes become another day off for Americans, but for Paralyzed Veterans of America and the many veterans we serve, it’s a very important day of remembrance and thanksgiving. This campaign will help bring light to veterans issues during the patriotic holiday weekend, and support our ongoing efforts to serve those who have sacrificed for our country’s freedom.”

Since 1964, Phoenix International Raceway has been the premier motorsports venue in the Southwest. Host to some of the most notable moments in motorsports history, PIR will celebrate its 50th Anniversary throughout the entire 2014 season. As the only track in the West to have two NASCAR Sprint Cup Series weekends a year, PIR kicked off the 2014 NASCAR season with its traditional March date and will round out the year with the semifinal race for the Chase for the NASCAR Sprint Cup in November. To purchase tickets to the semifinal race weekend in the 2014 NASCAR season, visit PhoenixRaceway.com or call 866-408-RACE (7223).

Paralyzed Veterans of America was founded by a group of seriously injured American heroes from the “Greatest Generation” of World War II. They created a nonprofit organization to meet the challenges that they faced back in the 1940s—from a medical community not ready to treat them to an inaccessible world. For more than 68 years, Paralyzed Veterans’ national office and its 34 chapters across the nation have been making America a better place for all veterans and people with disabilities. (www.pva.org)