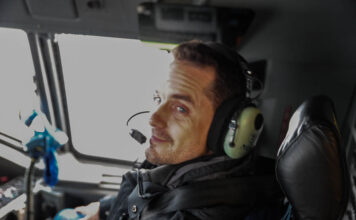 Instead of his usual mission to make it to Victory Lane, Casey Mears and his entire No. 13 GEICO Chevrolet Germain Racing team went on a different kind of mission aboard a US Air Force C-17 Globemaster III.

The group accompanied members of the US Air Force from Dover Air Force base on a complex refueling mission that also included an assault landing as well as a cargo drop.

Mears became interested in the Air Force mission after his race crew went in the spring for a tour of the Dover Air Force base.

“So, going back when we had an opportunity to do this, it was something that I wanted to go try,” Mears continued. “It was more on a whim than anything, but what a great opportunity. I think anytime you do something like that it allows you to appreciate even more what those men and women in the Air Force do for us.”

“Just seeing how they prepare to do what they do and to be on an actual training flight with them was pretty interesting,” Mears said. “They made good use of everything that was going on in the cockpit. You could tell that they were learning and keeping up to speed on their task as well. It was fun to see them in the heat of the moment really performing something that seemed pretty difficult.”

Mears acknowledged that his mission in his Sprint Cup car bore some similarities to the mission of the US Air Force 436th Airlift Wing group.

“I would just say that the technical aspect is similar,” Mears said. “The mindset and the approach to what they do is very diligent, which is what we have to do as far as being very prepared. They have checklists like we have checklists. It was way more detailed than ours and longer.”

“There were a lot of procedures that they had to go through,” Mears continued. “Watching them fly the plane, how they worked the throttle, looking at the tools they have to have the best possible outcome, we do a lot of the same things.”

“We are constantly fine-tuning what we do just like them, making small adjustments that make a big difference,” Mears said. “To watch their hands on the controls as they were trying to get up to the fueling tanker, it was very, very small movements. Then when they were done, you could see how stressful it really was. They made it look seamless but you could tell that it was a very, very difficult maneuver to do. When they got done, they were relaxing their hands and wiping a little sweat from their brows. It was because they were very focused and not nervous and I could definitely relate to that. Everything we do, like them, is under the gun.”

While many maneuvers were practiced and observed on the Air Force mission, Mears was most taken with the refueling procedure.

“I think for sure the act of accomplishing the mid-air refueling was the most impressive thing. The plane, the tools, the stuff that they utilize are all stuff that is of interest to us,” Mears said. “We are after the same thing as lighter is faster. The way they built that aircraft, there was nothing extra on it and it was as light as they could make it to be as efficient as they can and carry the biggest loads that they can. We’re pretty versed on what it takes to do that because we’re always trying to make our race cars lighter. For sure, the actual act of trying to plug in and receive the fuel was pretty intense and impressive for sure.”

Mears was also impressed with the team aspect of the Air Force mission and, in fact, held a bit of his own team meeting aboard the C-17 to debrief with his crew.

“What happened was that it was pretty loud in the base of the plane so as everyone was getting ready to cycle up and watch the refueling, we took the opportunity to get together and share what they just saw,” Mears said. “We were talking about the details of it, how close it was, the turbulence you felt as you got closer to the other plane.”

“We were impressed with how technical that was and how difficult that is and the teamwork that it took on our plane as well as on the other plane,” Mears continued. “The collective team that it took was amazing. There was a lot of strategy and communication back and forth, which we can relate to that because that is how we live is on the radio at the race track.”

Mears did take away some lessons from his Air Force mission that he intends to apply to his race team.

“The one thing that I think you can always learn from the military is how organized they are,” Mears said. “There isn’t really a check list that is too long. You can’t double and triple check too much. I think that very many times in our sport, when there is a mistake with the car or something procedurally with what we do, it is simply something that was overlooked.”

“Whether it was a part that wasn’t tightened down going into the race or a tape that wasn’t studied well enough before we went into the next event, there is no replacing being prepared,” Mears continued. “I think that is one thing the military does a good job of.”

“They are also very clear on the radio,” Mears said. “There wasn’t one time on the radio where I second-guessed what somebody was saying. You knew this guy meant this.”

“I think a lot of times in our sport, as clear as we are, there can be a lot of slang, personality that comes out over the radio. And at times that can cause confusion and you kind of go ‘did he mean this or did he mean that?’ Mears continued. “On the radio, the things they did and said were very, very clear. I guess organization, being precise and being clear are all things that I took away from that that were important.”

“It was just impressive,” Mears said. “It’s easy to be on the ground and say we’re going to go up on this plane to do a mid-air refueling and you think that sounds like a lot of fun. And in your mind, you think those planes must have to get pretty close and that must be pretty difficult but when you witness it first-hand like we did and having the fueling plane be as close as it was, you realize just how technical it was.”

“It was so impressive to see them do their job as efficiently as they did.”