B-2 Stealth Bomber to Soar Over Talladega Superspeedway Prior to Green Flag for CampingWorld.com 500 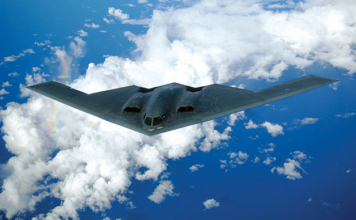 TALLADEGA, AL – Talladega Superspeedway is known as the biggest and baddest race track on the planet. The U.S. Air Force B-2 Stealth Bomber may not be the biggest, but it is no doubt the baddest aircraft that one will ever see. The two will come together Sunday for the most anticipated NASCAR Sprint Cup race of 2015 – the CampingWorld.com 500.

The B-2 Stealth, which sports an incredible 172-foot wingspan, will be part of the pre-race ceremonies for the CampingWorld.com 500, providing an unforgettable flyover at the end of the National Anthem, which will be performed by the 313th United States Army Band. The flyover will take place just moments before the drop of the green flag for the CampingWorld.com 500, the final race of the Contender Round in the Chase for the NASCAR Sprint Cup in which the field of 12 eligible drivers for the title will be trimmed to eight at the checkered flag.

The pilots and ground crew with the B-2 Stealth Bomber are from the 13th Bomb Squadron, one of the oldest units in the United States Air Force, under the 509th Bomb Wing in Whiteman Air Force Base, MO – the only location in the world with B-2 Stealth Bombers.

The 509th Bomb Wing led the way for America’s first military response after the terrorist attacks on New York and Washington, D.C. in 2001. It was the first U.S. aircraft to enter Afghan airspace and flew roundtrip from Missouri, logging combat missions in excess of 40 hours – the longest on record. It paved the way for other coalition aircraft to engage Taliban and Al Queda forces.

The action-packed day concludes Saturday evening at the intersection of Eastaboga and Talladega Boulevards for Talladega’s traditional infield concert, headlined by award-winning Mercury Nashville recording artist Easton Corbin.  One of NASCAR’s favorites, Tim Dugger, will kick off the night and rock the rowdy infield crowd. The best part about the concert is that admission is free with the purchase of a Sunday race ticket for the Camping World.com 500 (starting at 1:30 p.m. CDT).

Talladega Superspeedway is NASCAR’s Most Competitive Track (record 88 lead changes in 188 laps), most banked (33 degrees), and longest (2.66 miles), as well as the most fun and fan-friendly, offering up hundreds of acres of free camping, amazing kids ticket prices and special offers for military members and college students. The historic venue, built in 1969, is NASCAR’s “Party Capital” thanks to the track’s infamous infield, which features the traditional Saturday Night concert and the world renowned Talladega Blvd, home of the “Big One on the Blvd” party. It is the site of the most comfortable seats in motorsports, large video viewing boards (a new initiative planned for future implementation at all ISC tracks) lining the frontstretch and endless activities for fans throughout its event weekends. Log on to www.talladegasuperspeedway.com or call 877-Go2-DEGA for more information.