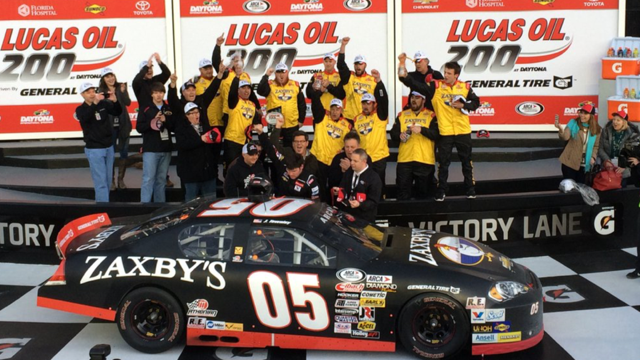 The 26-year-old Townley became the first winner of a stock car race at the newly-minted World Center of Racing, the first motorsports facility to feature stadium-styled seating.

He also became the first driver to take General Tire, the new official supplier of tires to ARCA teams, to victory lane.

Townley, the 2013 winner of the Lucas Oil 200, remains the lone Georgia driver to win an ARCA race at Daytona during a rich history that stretches 53 years.

“There’s so much to be thankful for,” said Townley, after being made aware of the significance of his win. “The guys at Athenian Motorsports, and I mean every one of them that travel with us and all of them that work so hard in the shop, gave me a fabulous Zaxby’s Chevrolet.

“(Crew chief) Kevin Reed and (team engineer) Skip Pope did a masterful job calling the race from the pit box. And my spotter, Terry Cook, is the best in the business.”

So how does winning for the second time at Daytona compare to last year’s NASCAR Camping World Truck Series victory in Las Vegas?

“Oh, my gosh,” Townley said. “That’s a tough question. When you’re at this level, it’s so hard to win these races. So, I certainly take nothing for granted. But if I had to pick two places to win races, I don’t think you could do much better than Daytona and Las Vegas.”

Townley will have little time to celebrate his win.

He and his Athenian Motorsports team are already working to apply what they learned on Saturday to the season openers in Daytona for NASCAR’s Camping World Truck Series and Xfinity Series.

“I think I’ve become pretty decent at working the draft and I’m going to have to draw on all of my experience and knowledge to run well on Friday night (in the Truck) and Saturday (in the Xfinity Series race),” Townley said.

“We’re running for the championship in the Truck Series and will only run a handful of races in the Xfinity Series and here’s what I’m excited about…Michael Shelton will be the crew chief for us in all of those races. And we’ve got everybody on the road team that was with us in 2015 back this season.

“I’m so excited because we started jelling as one unit during the second half of last year. That gives me a lot of confidence that we’ll be strong right out of the gate. I can’t wait to get the NASCAR season started.”