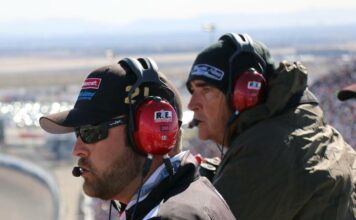 DEARBORN, Mich., June 16, 2016 – NASCAR spotters work high atop the speedway, out of television camera range and above the throngs of fans. Although they work in virtual obscurity, spotters are a key part of any racing team. They are the eyes of their drivers.

Josh Williams, 27, is the eye in the sky for Ryan Blaney and the Motorcraft/Quick Lane Racing team. Like his driver, Williams was born into the racing world. His grandfather was general manager of Martinsville Speedway for 20 years and his parents sold merchandise for Dale Earnhardt.

“From the time I was 6 months old, I was practically raised traveling the NASCAR circuit on weekends and spending time at racetracks so I could be with my parents,” says Williams who has worked with Blaney since he started driving the Motorcraft/Quick Land Ford in 2015.

“I spot everything he drives from Cup, XFINITY and trucks so it keeps me busy, which is fun,” Williams explained. “It’s a great opportunity to work with a young star at the beginning of his career and to be associated with the Wood Brothers and Team Penske.”

A native of Martinsville, Va., and the son of parents working on the NASCAR circuit, Williams said a career in racing was almost predetermined.

“I raced some myself in the Allison Legacy series (1/2-scale Cup cars), quarter midgets and go karts,” Williams explained. “When I was old enough, I started working on the souvenir trailers with my dad at tracks that were closer to home to make some spending money during the summer. I did that all the way up until 2011.”

That’s when a friend of his, driver Scott Speed, asked him to spot for him at the 2011 Bristol night race, derailing a potential professional golf career for the one-time Virginia state high school links champion.

Williams, who still plays a handful of tournaments each year, played four years on the mini tours and even won 12 events, but said it became too expensive to pursue as a career right about the time Speed invited him to Bristol.

“I dove straight in to see what the whole spotting thing was like,” Williams said. “He needed a spotter and asked me if I would come do it for him because he needed someone he could trust. At the time I had no experience spotting other than a few Allison Legacy races for my cousin. So I went with Scott to spot as just kind of a fun thing to do for a few weekends to end the season that year.”

The 2011 experience led to full seasons with Speed in 2012 and 2013, plus stints with T.J. Bell and Jeffrey Earnhardt in the XFINITY Series. In 2014, Williams spotted for Michael McDowell and A.J. Allmendinger.

Williams has been part of race-winning efforts in each of the three major NASCAR series, including a Sprint Cup victory with Allmendinger at Watkins Glen in 2014. He said his most-proud career moment so far is his and Blaney’s first win together in last season’s XFINITY race at Iowa.

“That first win with Ryan at Iowa, getting Team Penske a win, meant a lot,” he said. “It validated every reason why I wanted to spot for him. We had a lot of tough re-starts near the end of that race and had to earn it.”

Motorcraft/Quick Lane Fusion driver Blaney agrees: “Josh is always very calm on the radio and he can calm me down when I get flustered. Drivers and spotters have their own language so it’s huge that he’s my spotter for every race I run. When you’ve been working with someone for a while you get used to that familiar voice in your ear, which is comforting. Josh is my guy no matter what I race I know he’s going to be on the roof for me.”

Williams and his driver also concur that being a spotter is more than just telling your driver where other cars are on the track.

“If another car has found a different line and is going a little faster, he can let me know and I can go try it,” Blaney said. “He’s also really important on re-starts, especially on (restrictor) plate tracks to put me in the right position.”

Williams added, “Ryan can only see a straightaway or so in front of him so he can’t see where everyone is running and what lines are working best. I also do a lot of stuff for the pit crew guys like telling them where he is on the track and on pit road so they can be prepared to make a stop. I also tell the crew chief if we move lanes and how our car looks.”

There are times when the spotter has to be a bit of a cheerleader for his driver, says Blaney.

“There are going to be races when the driver struggles or the car struggles,” he said. “You’re not going to run up front every single race. Another job of the spotter is to pump you up and help you as much as possible and sometimes be a cheerleader. It’s a good balance between the spotter and crew chief to keep the driver in a positive frame of mind when all is not going great.

“It’s nice to have a good relationship with your spotter and I think I have that with Josh,” Blaney continued. “It’s been a lot of fun being with him for the last year and a half. He and I kind of have our own language, which is good. We’re buddies, too, away from the track, which I think just helps.”

No Better Job on a Race Team

When asked if he aspires to any other position on a race team, Williams said “no” emphatically.

“There’s no other job that gets you closer to the action other than being a driver,” he said. “Race teams are a big puzzle and each piece has to do its job to make a complete picture. It’s cool knowing that the guy beside me can’t do my job and I can’t do his but together we can win races!

“My favorite thing about spotting is that there’s nobody else as close to being in the car and in the middle of the action than you are,” he said. “You’re the eyes and voice for the driver and with one slip up you could ruin a lot of people’s race cars and their day. I love the intensity of not being able to make any mistakes and being right there in the middle of battle with Ryan. I really enjoy the plate races like Talladega and Daytona for that same reason. That’s where I feel spotters have a bigger impact and it’s so much fun being in the middle of that!”

For a son of Martinsville, the chance to work with Wood Brothers Racing and Team Penske is close to a dream come true.

“The Wood Brothers’ race shop was just 20 minutes up the road, so growing up they were always the home team and you always kept up with how they were doing,” Williams recalls. “It’s so much fun to be part of their 66-year history and to hear those stories every weekend at the racetrack. Going full time with the Wood Brothers this year has been incredible.

“And being part of Team Penske speaks for itself,” he continued. “It’s of the most-respected organizations in the world, not just in motorsports, and it really shapes you into how to carry yourself in your everyday life. Being part of adding two XFINITY wins for them last year and an XFINITY owners championship is something I’ll never forget.”

Ford’s Quick Lane Tire & Auto Center offers routine vehicle maintenance such as oil and filter changes, light repair services including brake repair, and tire replacements on all vehicle makes and models. With nearly 800 locations and growing, customers can visit  www.quicklane.com to find a center that is closest to them, print savings coupons and review maintenance tips to keep their vehicles running at peak efficiency. This site includes information on how to spot tire wear, how to jump-start a battery and even a series of tips to improve a vehicle’s fuel economy.

Wood Brothers Racing was formed in 1950 in Stuart, Va., by Hall of Famer Glenn Wood.  Wood Brothers Racing is the oldest active team and one of the winningest teams in NASCAR history. Since its founding, the team won 98 races (including at least one race in every decade for the last seven decades) and 117 poles in NASCAR’s top-tier series. Fielding only Ford products for its entire history, the Wood Brothers own the longest association of any motorsports team with a single manufacturer. Glenn’s brother, Leonard, is known for inventing the modern pit stop.  The team currently runs the Motorcraft/Quick Lane Ford Fusion driven by Ryan Blaney in the famous number 21 racecar.

Official Release
Previous article
The Final Word – New package excites Brad, Joey, Jeff and D.W. but as for Junior, not so much
Next article
GMS Racing and Ben Kennedy Welcome Wheelwell as Primary Sponsor at Iowa Speedway