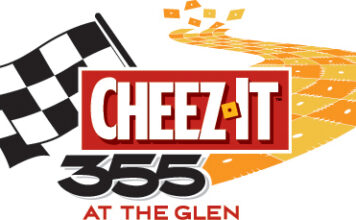 WATKINS GLEN, N.Y. (August 8, 2016) – It was an eventful weekend for NASCAR Sprint Cup Series driver Michael McDowell as he earned a career-best finish at Watkins Glen International in his 200th career start.

McDowell, piloting the No. 95 Thrivent Financial Chevrolet SS, finished 17th in the Cheez-It 355 for Circle Sport – Leavine Family Racing, earning the team its third Top-25 finish in row and 12th for the 2016 season.

“The team did a great job all weekend,” said McDowell after the race.  “We had a good qualifying effort with an 11th place starting spot.  The race result was solid but not entirely what we wanted.  We’ve progressed a lot in the past few weeks as a team and the results are starting to show.”

The No. 95 Thrivent Financial team tested at The Glen the week prior to the Cup Series event and had solid lap times on the newly paved surface.

On Friday, the team had two practice sessions to dial-in the No. 95 Thrivent Financial Chevrolet for the race as well as qualifying.  McDowell consistently made fast laps on the track and ended up seventh fastest on the leaderboard during final practice on Friday.

Qualifying consisted of two rounds with the Top-12 fastest cars moving on to the final round.  McDowell secured a 70.248 lap putting him fifth in the first round and moved on to the second round to vie for the pole position.  The No. 95 team made two runs, with a fast lap time of 70.352 placing the team 11th on the starting grid.

McDowell avoided multiple wrecks during the 90-lap event and raced in the Top-20 for a majority of the day.  The 17th place finish was a career-best for McDowell and the race team at Watkins Glen International, beating their previous best finish of 20th last season.

The No. 95 Circle Sport – Leavine Family Racing team will travel to Bristol Motor Speedway for the Bass Pro Shops NRA Night Race taking place on Saturday, Aug. 20 at 8:00 p.m. ET.  Fans can tune-in on NBCSN and PRN for live race coverage or follow the team on Twitter at @CSLFR95.