Majeski Brings Iconic No. 60 NXS Ford Back on Track at Iowa 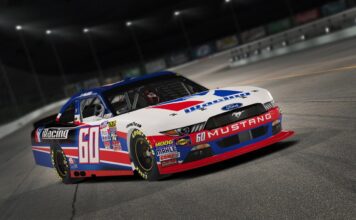 CONCORD, N.C. (June 21, 2017) – When Ty Majeksi makes his first career start in the NASCAR XFINITY Series this week at Iowa Speedway, he will be doing it in one of the most noted cars in NASCAR history. Majeski will pilot the No. 60 iRacing Ford this weekend, a car entry that holds the record for NASCAR XFINITY Series wins with 93. The car has been driven to victory lane on numerous occasions by NASCAR and former Roush Fenway legends Mark Martin, Greg Biffle and Carl Edwards.

Biffle, Edwards and Chris Buescher have all driven the car to championships in the NXS. The car last won in June of 2015 with Buescher, who won three times in the No. 60, taming the Monster Mile in dramatic fashion and posting wins at Mid-Ohio (2014) and Iowa before claiming the championship for the No. 60 in 2015.

Martin, who drove the No. 60 to victory lane 39 times and led almost 7,000 laps in limited action in the series, has had high praise for the entry’s latest driver.

“With Ty Majeksi, I think Roush Fenway may have the one,” said Martin. “I think he is Roush Fenway’s next Matt Kenseth or Carl Edwards. I think they are sitting good with him as a young driver developing. I’ll be watching with great interest.”

The NASCAR Hall of Famer even went so far as to express his anticipation of Majeski’s debut earlier this week in response to Majeski’s latest win in the Illinois Lottery 50 at Gateway.

“@tymajeki is coming for your guys in #NASCAR and it’s going to be fun to watch,” said Martin on his Twitter account.

Martin has not been the only NASCAR personality raving about the NASCAR Next driver. Dale Earnhardt Jr. also exhibited high praise for Majeski on Twitter.

“@Tjmajors (spotter) told me to keep an (eye) on him two years ago. I think he might be one of the best new talents available,” said Earnhardt in January of 2016.

The history Majeksi will look to build on in the No. 60. at Roush Fenway, includes over 15,800 laps led, 277 top-five and 382 top-10 finishes. Biffle drove the car to a 2002 NXS Championship, with Edwards bringing home NXS Championships in 2007 and 2011 (Owner’s) and Buescher in 2015. Current Roush Fenway drivers Ricky Stenhouse Jr. and Trevor Bayne have also each piloted the No. 60 in the NXS.