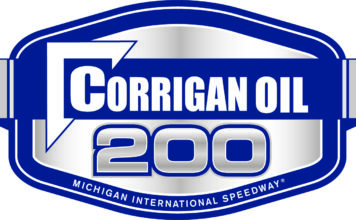 BROOKLYN, Mich. (Feb. 6, 2018) — Corrigan Oil is expanding its partnership with Michigan International Speedway in 2018. The company will be the entitlement sponsor for the August NASCAR Camping World Truck Series Corrigan Oil 200.

Corrigan Oil Company has been the sponsor of the ARCA Racing Series presented by Menards race at MIS since 2014. During that time the company has seen the value from its partnership with the speedway continue to grow and decided the time was right to increase its investment.

“We are excited to continue to expand our relationship with Michigan International Speedway and the sport of racing,” said Mike Corrigan, Corrigan Oil Company president. “We are happy to announce that we are sponsoring the 2018 NASCAR Camping World Truck Series this August. For the last few years we sponsored the ARCA Racing Series Corrigan Oil 200 and we wanted to change it up a bit. I think the truck race is a great fit for our company and customers. We have had such great results with our customers and brand awareness, we look forward to race weekends every year!”

Corrigan Oil Company markets its brand to its target audience through television, radio and print mediums on a state and nationwide basis as the title sponsor. It also gives the organization access to a tremendous social media network already built by MIS and NASCAR.

As part of its partnership with Michigan International Speedway, Corrigan Oil Company will continue to provide a service to the fans on race weekend. The company has their Express Stop convenience stores setup throughout Michigan International Speedway to provide any last minute items a guest might need. They even deliver ice and firewood right in the campgrounds to guests. Corrigan Oil supplies multiple fuels for all the races at MIS.

“We are excited to expand our partnership with Corrigan Oil,” track President Rick Brenner said. “It is great to work with a Michigan company who shares the same guest service philosophies as we have here at MIS. We look forward to the NASCAR Camping World Truck Series Corrigan Oil 200 adding to the week-long excitement and entertainment planned for August.”

The partnership will allow Corrigan Oil Company to connect with the citizens of the Great Lakes region and potential customers throughout NASCAR. The two share the same values of teamwork and competing to be the best, making for a natural partnership.

Corrigan Oil Company is family owned and operated since its establishment in 1958. Corrigan Oil has since expanded into a family of companies including, Corrigan Oil Co., Construction, Lubricants, Propane and Transportation. Headquartered in Brighton, MI, Corrigan serves Michigan, Illinois, Indiana and Ohio. For more information please visit us on the web at www.corriganoil.com or call 1-800 FAST OIL.

Corrigan Oil Company dedicates itself to serving our customers by providing the greatest value in services for the industrial, residential and commercial marketplaces.

After the Corrigan Oil 200 fans can stay and enjoy the free post-race concert featuring The Cadillac Three. The long-haired trio from Nashville will rock the MIS stage at the Saturday post-race concert in August. All fans with a Sunday admission will enjoy the concert! The concert will take place behind Turn 3 and all activities will start after the NASCAR Camping World Truck Series Corrigan Oil 200 race on August 11.

Tickets to the all the races at Michigan International Speedway go on sale to the public on February 8. And fans will want to get their tickets fast to save up to $50 per grandstand ticket and up to $30 per campsite.

This marks the third race entitlement sponsorship announcement by Michigan International Speedway recently. FireKeepers Casino extended its partnership with the speedway to continue to sponsor the June Monster Energy NASCAR Cup Series FireKeepers Casino 400 for many years to come.

In addition, LTi Printing increased its involvement with the speedway and NASCAR to become the entitlement sponsor of the NASCAR XFINITY Series LTi Printing 250. This is after spending the 2017 season as the name of the NASCAR Camping World Truck Series race at MIS.

Nestled in the lush Irish Hills of Southeastern Michigan, Michigan International Speedway is NASCAR’s fastest racetrack. It has been the love of NASCAR racing and the thrill of a great time for race fans and drivers alike for 50 years.