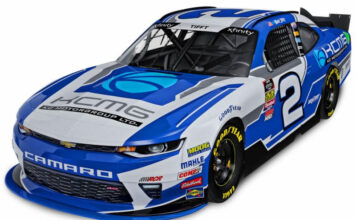 WELCOME, N.C. (April 2, 2018) – Following a successful debut in the 2017 NASCAR Xfinity Series season with Richard Childress Racing (RCR), KC Motorgroup Ltd. (KCMG) has enhanced its partnership with RCR into 2018. KCMG, which served as a partner at Darlington Raceway last season, will expand into a multi-race partner on RCR’s No. 2 Chevrolet Camaro piloted by Matt Tifft in the NASCAR Xfinity Series.

KCMG, an international motorsports group based in Hong Kong, is paving the way of professional racing through support and development across the Asia-Pacific region with operations also expanding into Europe. The organization, founded in 2007, became the first Chinese team to race in the Le Mans 24 Hours and scored a historic LMP2 victory in 2015.

Through its partnership with RCR, KCMG is working to create unique U.S. business development avenues for the Asia-Pacific region through a NASCAR platform.

“It has always been KCMG’s objective to be Asian motorsport’s frontrunner and to succeed in multiple racing disciplines,” said Dr. Paul Ip, founder of KCMG. “American stock-car racing is one of the most exciting platforms that we have out there, and it has always been my vision to be the first Asian team to take on this challenge. This expanded partnership with RCR in 2018 is just the beginning of what we see as a long-term plan in our motorsport division, and we’re looking forward to achieving new milestones with Matt Tifft and the entire RCR crew.”

“We’re thrilled to have Dr. Paul Ip and KCMG back at RCR in an expanded role in 2018,” said Torrey Galida, president of RCR. “Last season’s race at Darlington Raceway was an opportunity for our two organizations to get to know each other and explore how we could partner with each other to further build KCMG’s presence in the American stock-car racing market. We look forward to continuing to work on that platform with KCMG during the 2018 season.”

KCMG will make its first appearance on Tifft’s No. 2 Chevrolet Camaro at Talladega Superspeedway for the NASCAR Xfinity Series race on Saturday, April 28.

For additional information on today’s announcement, and all that’s happening at RCR, please visit rcrracing.com.

About KCMG:
KC Motorgroup Ltd. (KCMG) is an international motorsport services group established in 2007 by Dr. Paul Ip. The group, with its headquarters located in Hong Kong, has operations reaching across Europe and the Asia Pacific region. KCMG operates closely with many partner companies and racing organisations around the world to provide unrivalled Motorsport Services, Equipment, Team Management and quality distributorship in the Automotive Industry. 2013 saw KCMG become the first Chinese outfit ever to race at the world famous Le Mans 24 Hours in its 90-year history and participate in the FIA World Endurance Championship. The Hong Kong-based team later on took an historic LMP2 victory at Le Mans and was Vice Champion in FIA WEC in 2015. With years in the motorsport industry, KCMG has been involved in a wide range of Formula, GT and Le Mans prototype endurance racing series across the globe. For more information please visit www.kcmg.com.hk or email info@kcmg.co.hk.