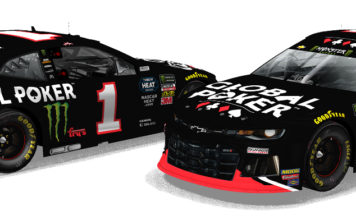 Global Poker looks forward to supporting the NASCAR community with this new venture and urges fans to head to GlobalPoker.com/NASCAR for more information and checkout their social media platforms, Instagram and Twitter on race day for exciting giveaways and promotions!

· Game On!: Global Poker is the leading poker site in the United States, offering a social poker room with a difference. Global Poker is free to play and has over 1 million players. No purchase is necessary to enjoy their diverse range of poker games or to be in the running to join Victory Lane! Every month Global Poker pays out millions in real cash prizes instantly to US players!

· A Monster Career: Kurt Busch is an accomplished veteran in the MENCS, both as a race winner (30) and a series champion (2004). He has also won marquee MENCS events such as the Daytona 500 (2017) the Coca-Cola 600 (2010) and the NASCAR All-Star Race (2010). Busch has not only won a race on every type of track that the series competes on, (superspeedway, intermediate, short-track and road course), he has also claimed a pole on each type of track, in addition to being named the 2018 MENCS Busch Pole Award winner for the most pole awards on the season, at five.

· Laurence Escalante, Founder and CEO, VGW Holdings: “This new relationship between Global Poker and CGR is perfect for both brands. Global Poker is the fastest growing poker site in the US, so teaming up with CGR in NASCAR, the fastest sport in town, makes perfect sense. Kurt Busch and the CGR team bring high octane thrills and excitement to millions of fans all season long, which perfectly fits with our business motto, ‘entertainment with a thrill’. I am confident that together we can create something truly memorable for both our players and their fans. Thanks to our friends at Oak View Group for bringing us together.”

· Kurt Busch, No. 1 Global Poker Chevrolet Camaro ZL1: “I’m looking forward to having Global Poker on the car starting this weekend at ISM raceway here in Phoenix. They are really excited about their first venture into NASCAR and I am glad that it is with our team.”

· Doug Duchardt, Chief Operating Officer, Chip Ganassi Racing: “It is always exciting to bring new partners to our organization and to the sport. We are delighted that Global Poker has not only made a commitment to CGR, but to also utilize the sport of NASCAR as an opportunity to promote their games.”

Chip Ganassi has been a fixture in the auto racing industry for over 30 years and is considered one of the most successful as well as innovative owners the sport has anywhere in the world. Today his teams include two cars in the NTT IndyCar Series, two cars in the Monster Energy NASCAR Cup Series, two factory Ford GT’s in the IMSA WeatherTech SportsCar Championship, and two factory Ford GT’s in the FIA World Endurance Championship. Overall his teams have 19 championships and more than 200 victories, including four Indianapolis 500s, a Daytona 500, a Brickyard 400, eight Rolex 24 At Daytonas, the 12 Hours of Sebring and 24 Hours of Le Mans. Ganassi boasts state-of-the-art race shop facilities in Indianapolis, and Concord, N.C., with a corporate office in Pittsburgh.