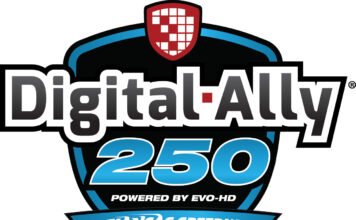 The finish marked the best for Gilliland to date in the 2019 season.

How would you describe your race tonight?

“Uneventful, so that was a good thing. We worked really hard all through practice, got the truck a lot better. Me and my crew chief, Marcus Richmond, really were on the same page all weekend. That’s what it’s all about is putting together just solid weekends like this. We qualified fifth and finished third, that doesn’t sound overly spectacular, but when we have been qualifying in the teens and finishing there too, this is a big difference. Just a big confidence booster and hopefully something we can carry into Charlotte and put our JBL Tundra up front again.”

Was this the type of race you needed to build momentum for your team?

“Absolutely. We’ve really struggled over the last few weeks, but that is what a team is all about. Staying together through everything. It’s definitely the best run we have had in a long time. We just have to try and take this momentum into next week. I think my crew chief and whole team is very excited with the truck we are bringing to Charlotte.”

Did you feel you had a truck capable of battling for the win tonight?

“A few guys had some issues – I felt like we had about a sixth or seventh-place truck really. The guys fought hard all day. We fought really loose all race long. The second set of tires got us tight and I just think we had a bad set of tires. Once we put the other set on it was just way too loose after loosening it up, that really hurt us, but I can’t thank TRD enough for coming on board again this weekend and celebrating TRD’s 40th anniversary. It’s really special for them and for me to be able to drive that Tundra. I wanted to put it in victory lane so bad. It just wasn’t in the cards tonight. I can’t thank Shige (Hattori, team owner) and (Mike) Greci (team manager) and everybody back at the shop enough. Really can’t thank Jack (Irving, TRD) and Tyler (Gibbs, TRD) for what they’ve done for me over at Toyota. And tonight, I was racing for Officer Jordan Sheldon. A lot of guys know that he lost his life in Mooresville. I was racing for him tonight and I was wanting to get the win for him and his family, but like I said, it just wasn’t in the cards and we’ll move on to Charlotte. We’re going to keep building. I feel like we have a win under our belt soon, we just have to close it out.”

How were you able to come back from the early spin to claim and top-five finish?

“I fought loose all night in the truck. We were really tight in practice and I was pretty surprised about that. I just could never get it out of it. I guess we found our limit the first run there. All in all, that’s why you don’t give up in these races. You can always come back to get inside the top-five for the finish and have a shot to get to victory circle. Everybody at KBM kept their heads in the game and looking forward to getting to the next one with these guys.”

“It was definitely a struggle. We had some speed by ourselves, but then once we got in traffic we just stalled out and couldn’t get any front turn in the truck. That was probably the biggest issue. Just overall fighting grip all night long. We just couldn’t find any grip all day since first practice. I don’t really know what it was, but we’ll figure it out. This was a big learning experience for me at an intermediate track and completing all the laps was cool. Just looking forward to the next one.”

“It was not fun. We’re just used to running better than that and we were honestly just terrible tonight. I don’t know why. Just no overall grip. In first practice, I felt really, really good about it and then in second practice it all went away and that was really, really weird. Just could never get it back from that. We tuned on it a ton and it went either way, from tight to loose, but it was just a lack of overall grip. I could have done better on my part, could have had better restarts to take advantage of opportunities and get track position. We just struggled tonight all around as a team. We’ll be back at Charlotte and hopefully get a win.”