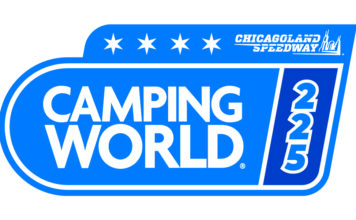 Kyle Busch Motorsports driver Harrison Burton was made available to the media in Chicago:

You had a great race day in Iowa. Talk about your finish.

“That was a big confidence boost for me. To go out there and run up front with the 18 team was a lot of fun for me to go out and race the Xfinity Series guys, like (Justin) Allgaier. We were racing side-by-side for most of the day. It was a lot of fun. We had a good time out there. I am excited to get back out there with them in New Hampshire, but right now I am focused on the Truck Series.”

This place gets super-wide as the day goes on. How does it work for you?
“This is my first time here, so I’m learning along the way. The track widens out a lot; I just ran the ARCA race last night and was in the third groove almost all night. We weren’t as good as we needed to be, but we were a second-place car and that is where we finished. I had a good time racing all around, and having to pass cars on the top last night. Hopefully I can take what I learned there into this race and have it all dialed in.”

How much did running last night’s race help you?

“I think it helps you more with confidence. I had a good night last night. I felt like the night went pretty smooth; I did a pretty decent job, and I learned a lot. I feel more confident going into the Truck race because I made the top work. I can go an implement some of the things I learned in the ARCA race last night and go right into the Truck race with more laps than all the other guys and hopefully that will be an advantage for me.”

It looked like you had a lot of speed in your car from last weekend.

“We were fast last week, but we were good at Iowa the week before that as well. We finished third. We have been going in the right direction, especially in our short track program. We ran really good at Dover earlier this year as well, and had a chance to win, should have won, but I made a mistake. We have been building, especially in our short track program, is getting better and better, and our mile and a half program has been getting better as well. The last mile and a half that we ran was Texas and we finished fifth. Hopefully, we are building toward that first win.”

Are you picking your ARCA races strategically or is based on sponsor request?
“Kind of both. I got to pick and choose some of the ARCA races I went too. I chose all mile and a halves except for Pocono and Daytona. That way I can gain experience on bigger tracks, and those two are still aero dependent big tracks. I am learning a lot for the future. This sport is getting to you have to be good on so many types of race tracks. You come up and run short tracks every week for years and years and years, and then you come up to a mile and a half and you are expected to perform and win races. It is very different racing style. I am trying to get it all figured out and do the best job I can and have a ton of fun.”

Does it put more pressure on you or is extra motivation to have a car owner (Kyle Busch) that can come down an preform at a high level?

How much does Kyle (Busch) work with you?

“He’s definitely involved in the team and is involved with the drivers. He has been pretty busy with the Cup deal recently, trying to get it dialed in. They have been on the West Coast, but when he is around he definitely helps out.”

How much does the points situation motivate you?
“I am really motivated by that. I wake up every morning and I know that I have an opportunity to make myself better. I know I have an opportunity to go out and make the playoffs in the Gander Outdoors Truck Series which is really cool. It is an awesome opportunity to have your back against the wall; it builds you as a person and as a race car driver. It pushes your limits and shows you how tough you can be. I think if we get in, which is definitely in our plans, we will be stronger for it and we will be a truck to watch out for.”

Have you had another time in your career that you have had to overcome something?

“Definitely. I think back to me and Todd Gilliland’s championship run in 2017. We went back and forth the whole year, and we both came into Dover with four wins and I came out with five wins, so that was cool for me to go out and win that race and make something happen there and boost my confidence going into the year after that. The people that tend to make something happen are the ones that stick around in this sport.”