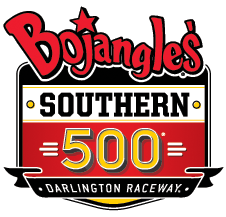 FLORENCE, S.C. (September 2, 2019) – Erik Jones made his 100th career NASCAR Cup Series start a memorable one as he captured the win at Darlington Raceway in one of the sport’s crown jewel events.

With the win, Jones has punched a spot into the NASCAR Playoffs where he joins Toyota teammates Kyle Busch, Denny Hamlin and Martin Truex Jr.
Busch clinched the regular-season championship title with a third-place finish with only one race remaining before the Playoffs.

Take us through those last 10 laps and what you had to do to hold off Kyle Busch.

“Well, it was just a lot of pressure. Kyle (Busch) is a great race car driver. I’ve raced him a lot and you obviousy want to beat him to win, right? I know our first win at Daytona was great, but man, this one feels good. Just getting back to victory lane, showing we can do this continuously. Man, it was a lot of work. I’m mentally drained, I’m physically drained. I knew he was running the wall and I knew I was going to have to go up there and try to hold him off. It took everything I had to do it. I was pedaling hard. Fortunately, he got into the wall a couple of times. He gave me a little breathing room for the last two laps. That felt good, but awesome to come home with this win.”

What does it mean to you to be able to withstand the pressure and prove what you can do?

“It felt great. I don’t know that there’s much more to be said. I was just locked in man. Tonight I was really locked in and really focused and really felt like it was our night once we got out front. I wasn’t in any shape to relent that lead, so it’s amazing for me to be able to hold off Kyle (Busch). It’s really cool just with the history we have with Kyle giving me my first opportunity in the Truck Seirs and getting to race him for a win in such a big race. That’s pretty cool and something I’m never going to forget.”

As a kid did you ever dream of winning the Southern 500?

“At seven years old, when I started, it seemed so far away. It’s incredible. I mean it’s incredible. I’ve got my family here, some great friends and it’s just so cool to have him there and celebrating this with me. It’s going to be a lot of fun. Man, I never would have dreamed to be honest with you. It was too far out to fathom really for me to even be in a situation like this and just thankful for JGR (Joe Gibbs Racing), Circle K, Sport Clips and DeWalt and everybody who’s been a part of this and really stuck by me this year and helped us get back here.”

Is that the hardest you’ve ever had to drive, and how much pressure was Kyle putting on you?

“ Yeah, I mean, I’m wore out just mentally and physically – more mentally than anything, but Kyle was really running hard, and he’s one of the best guys out there. Our Sport Clips Camry was good, but man, I was pedaling as hard as I could and just glad to hold him off and to finally get to victory lane. I feel like it’s been coming for us for a long time, so it just feels really good.”

You had all the speculation this year about what’s going to happen next year. What kind of answer is this for you to win a crown jewel event like this?

“Is there anything more to say? I mean, it’s been a lot of doubt and a lot of speculation, and I put my heart and soul into this and this race team, and this is my living and how I want to make a career and what I want to do. It doesn’t get any better. On my list, this race is really high, and it’s going to look damned good to see my face on that trophy.”

When you look at this paint scheme, the throwback to your rookie season in the late model, to now be sitting here with a crown jewel under your belt, what does that mean to you?

“Well, it’s pretty special, my 100th start. I guess sometimes funny things happen, right, and 100th start we’re in victory lane with my first‑ever scheme on a big car, so it’s pretty special. Thanks to Sport Clips for letting me run that. That meant a lot to me and my family. My mom is here for this one and that’s great. But all my partners, man, I’m so happy for them, DeWalt, Craftsman, Reser, Stanley, Circle K, Interstate, Toyota, just sticking with me through this – it’s been a big year of speculation and maybe moving around and I don’t think there’s much more to say than this right here, so it’s pretty good.”

How about these Darlington fans who stayed through the rain delay? It’s almost 2:00 a.m. and they’re still here.

“ Thank you guys for coming. You’re welcome to stay up all night with me because I guarantee I’m not going to bed.”

You mentioned the trophy and the iconic names, the biggest in the sport that adorn it. What’s it going to be like to have your face next to them?

“It’s going to feel pretty special. There’s a lot of great names on there, and this is one ‑ this race for me has always held a special place. When you think of NASCAR, for myself, I think of Darlington and this tough place. I’m drained, I’m mentally drained, I’m physically drained. I just ‑ man, I’m so happy right now to be here and can’t wait to celebrate with these guys, get back home and celebrate with my friends. It’s going to be a lot of fun.”

“You just can’t get there with this package. It’s just such a one‑lane racetrack. There’s not enough options, there’s not enough grooves that you can get enough air on your car to close that gap and make that pass. We kind of lost control of the race there on pit road when we came down the leader and then came out third and I thought if we could just keep in touch with those guys and keep close to them, then we might be able to out‑pit road them at the end of the race, and we did one of them but not the other one. Overall a good day and the Snickers Camry was fast and was the best we’ve run here in a long, long time, so that was fun. It was nice to lead some laps, be up front like that, but I hate it that we got behind on pit road and then we couldn’t make it up on the track. That kind of sucks.”

Before you caught Erik Jones at the end, were you doing a little conserving trying to save a little bit to try to get him?

“Yeah, when he started to inch out a little bit, I was trying to save my right front because I knew my right front wasn’t going to make it the whole rest of the way without me knocking the wall down, and I was right. I hit the wall with about four to go and then I hit it again with three to go, and that was ‑ it killed it that time. Luckily, we were able to salvage a third, just dragging the fence for the last two laps. I don’t think I’ve ever seen NASCAR not throw a caution in that scenario ‑ oh, yes I have, that’s right. I blew a left-front tire at California in an Xfinity race and we had to finish the whole last lap, so doesn’t surprise me.”