Despite rumors, Nemechek to Front Row Motorsports could be needed change for entire organization 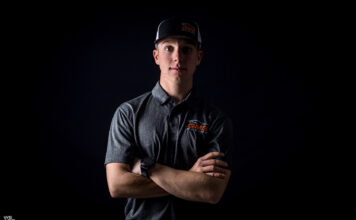 With the Cup Series returning to Texas Motor Speedway this weekend, one of the biggest headlines heading into Sunday’s AAA Texas 500 is the debut of John Hunter Nemechek. He will be filling in for Front Row Motorsports rookie Matt Tifft, who has been sidelined for the remainder of the 2019 season with medical issues.

Although Nemechek’s primary obligation is finishing up his rookie XFINITY Series campaign with the No. 23 GMS Racing Chevrolet group, there are rumors circulating that this could be a tryout for the 22-year-old driver since he has no plans for next season. FRM staple David Ragan is set to retire after this season, leaving one of the three seats open in the organization.

At this moment, Nemechek has made it clear that all he wants to do is go out and earn the respect of the other Cup drivers, telling SiriusXM Speedway’s Dave Moody:

“The storyline is we want to go and have a quiet weekend for us, just run as many laps as we possibly can and gain as much experience and just have a solid weekend. That’s our goal. It’s all new for me, I’ve never driven a Cup car before so it’s going to be a whole new process and whole new learning curve.”

However, should Nemechek go and do just that in the final three races, he could be a possible option for a vacant seat in an FRM Ford. That would mean that FRM would have two drivers under 25-years-old, and with Michael McDowell planning on being at FRM in 2020 despite the plan not being set in stone just yet, the organization may very well be on a renewed path instead of just being a home for drivers late in their Cup career.

Granted, that may not have been the case. But since the team’s inception in 2005, they’ve only won two events. At Talladega Ragan led a 1-2 finish in the 2013 Aaron’s 499 with David Gilliland close behind. Chris Buescher won a fog-shortened Pocono event in 2016 and made one Playoff appearance. This is after the team had been home to drivers such as Gilliland, Travis Kvapil, Josh Wise, and John Andretti.

But as in Buescher’s case, FRM has shown itself to be a good place for drivers looking to learn the rank-and-file of Monster Energy NASCAR Cup racing. Buescher has gone on to record strong runs with JTG-Daugherty Racing and now finds himself going to the No. 17 Roush-Fenway Ford in 2020. Tifft has established himself as a solid driver in the No. 36 with a top-10 at Daytona in July and 15 top-25 finishes in 32 starts.

Should Nemechek go for a full rookie campaign with FRM in 2020, there’s going to be no guarantee of success with the team. But there will be ample opportunity for both Nemechek and FRM to continuously grow in Cup racing, and FRM may be the step Nemechek needs to take to earn both respect and success as he advances in his NASCAR career.