Taylor Gray to Compete for DGR-Crosley in 2020 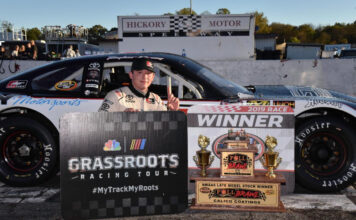 MOORESVILLE, N.C. (Dec. 18, 2019) – DGR-Crosley announced today that Taylor Gray will rejoin the team for the upcoming 2020 campaign. Gray will drive the No. 17 Ford Fusion in the newly formatted ARCA Menards Series. Due to age restrictions, Gray will miss the start of the season. After his 15th birthday (March 25th), Gray will compete full-time in both the Sioux Chief Showdown Series and the ARCA Menards Series East (ARCA East) in 2020. In addition to his busy schedule, Gray will also pick up select late model races throughout the season.

The 14-year-old Denver, N.C., native will make the transition to the ARCA Menards Series after competing in several Cars Tour races as well as additional Late Model Stock races for DGR-Crosley in 2019. In his first season with DGR-Crosley, Gray was able to capture five wins, including the Fall Brawl at Hickory Motor Speedway.

“I’m really excited for the opportunity to compete again with DGR Crosley in 2020,” says Gray. “We had a lot of success together this year in the late model stocks and were able to pick up several wins. It’s going to be a challenge competing in multiple series next year, but I’m confident that with our new relationship with Ford Performance we will be a force to be reckoned with.”

As the 2020 driver line up continues to expand for DGR-Crosley, co-owner David Gilliland is eager to get the 2020 season started.

“Taylor is a great asset within our driver line up at DGR-Crosley. I really enjoyed working with him last year as he developed his skills in late models. Taylor is absolutely ready to make the step up to the ARCA Menard’s Series. I am super excited to see what we will be able to accomplish together in 2020.”
﻿
Gray’s full schedule is still being finalized along with his team roster. Both will be released in the upcoming weeks.