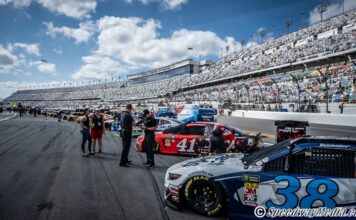 As a new year fast approaches, there are a number of changes that can be noted prior to the start of the 2020 season, including driver switches and schedule alterations. The upcoming season may also be the year of sport-changing announcements regarding the upcoming 2021 body style and the anticipated reorganization to the 2021 season schedule.

But as drivers and teams prepare to dial in their steel chariots at the World Center of Racing, here are a couple of changes that you should be aware of during the 2020 NASCAR Cup Series season.

62 years of speed: The Daytona 500 is less than 50 days away, which only means one thing: the start of another NASCAR Cup Series season. The Great American Race has produced astronomical victories for several drivers; namely Austin Dillon bringing the No. 3 Richard Childress Racing car back to Daytona’s victory lane, 20 years following Dale Earnhardt’s accomplishment; or Denny Hamlin securing an emotional victory following the death of J.D. Gibbs, son of team owner Joe Gibbs.

The week-long 2020 Speedweeks presented by Advent Health will welcome back the Busch Clash (formerly dubbed the Advance Auto Parts Clash) on Sunday, Feb. 9, following Daytona 500 Qualifying presented by Kroger. This annual exhibition race will return to its namesake, as it was named the Busch Clash, for the first 18-years of its history, beginning in 1979.

Continuing to add to the anticipation, Daytona International Speedway announced on Friday, Nov. 22, the renaming of the Thursday 150-mile qualifying races. Bluegreen Vacations Corporation, a Boca Raton, Fla. based vacation and resorts-industry hot spot will take over the entitlement sponsor of the twin duels on Thursday, Feb. 13. Speedway president Chip Wiles calls the duel races an “an integral part of Speedweeks.”

“The qualifiers’ history is rich and now we’re beginning a new chapter of that history, thanks to Bluegreen Vacations,” Wiles added.

The 62nd running of the Daytona 500 will be held on Sunday, Feb. 16, accompanied by the pageantry of NASCAR’s finest drivers. County musician Darius Rucker will bring excitement through the microphones before the drop of the green flag by two-time Daytona 500 champion Dale Earnhardt Jr. Tune in to live coverage, brought to you by FOX, beginning at 2:30 p.m. ET.

The 2020 shuffle: Many changes regarding drivers and sponsorship have been made so far during the 2019 portion of the NASCAR off-season; particularly, Paul Menard’s retirement and the inclusion of Matt DiBenedetto into the famed Wood Brothers family.

A pair of Daniels are out of the top NASCAR series in 2020. Rookie Daniel Hemric wheeled the No. 8 Richard Childress Racing Chevrolet Camaro to his only top-five finish at the spring Talladega race. However, things changed for the one-year Cup driver when he was released from the two-car operation in September. “Forever grateful to Richard and everyone at RCR racing for the opportunity,” Hemric mentioned on Twitter following the announcement.

Hemric will be replaced by back-to-back Xfinity Series Champion Tyler Reddick. Hemric will transition back into the Xfinity series to drive 21 races for JR Motorsports in 2020.

Despite announcing that he was “surprised” and had “secured millions,” Stewart-Haas Racing announced in November that Daniel Suarez will not return to the No. 41 Ford Mustang, as he was replaced by Cole Custer, who will come to the Cup Series after an outstanding four-year performance in the Xfinity Series.

Suarez put a cap on his third season in the Cup Series, following a desperate bid for a win with Stewart-Haas Racing after spending two years with Joe Gibbs Racing in the No. 19 Toyota Camry. During his reach, 27-year-old Suarez has secured 32 top 10s and two poles. A career best-finish of second place came for Suarez in the Pocono Hills of Pennsylvania in July of 2018.

Suarez has yet to announce plans for the 2020 season.

Aside from the notable, Xfinity great Christopher Bell will be welcomed by Leavine Family Racing in 2020, replacing DiBenedetto in the No. 95 Toyota Camry. Matt Tift and David Ragan are out at Front Row Motorsports, leaving veteran Michael McDowell in the No. 34 car and John Hunter Nemechek, who will replace Tift in the No. 38 Ford Mustang following Tift’s recent medical concerns.

We’re headed west: As Kyle Busch zoomed under the checkered flag at Homestead-Miami Speedway, it was the track’s final hosting of the series’ championship-deciding match up.

In 2020, teams will pack up and head west to decide the NASCAR’s top series’ champions. ISM Raceway (formerly known as Phoenix International Raceway) announced in March of 2019 they will host the 2020 NASCAR Championship Weekend.

The timely announcement comes after the completion of a $178-million modernization project that not only moved the start-finish line between what was seen as turns one and two but, re-envisioned the future of the Arizona 1.5-mile track.

“Ralph Sanchez’s vision for our track more than 25 years ago was to host a spring race and be a part of South Florida’s March calendar,” said then-Homestead-Miami Speedway President Matthew Becherer. “A March race weekend affords us many unique opportunities to entertain the South Florida community as we host NASCAR races for many years to come.”

NASCAR’s top drivers will see additional switch-ups in the 2020 schedule. Among those changes, Atlanta Motor Speedway’s date as second on the season schedule will be bumped back to host the sport following the daring west coast swing, immediately after the Daytona 500. Pocono Raceway will condense their two-date schedule into an entire June weekend and Daytona International Speedway says goodbye to their summer July race and says hello to the regular-season finale, to take place on Saturday, Aug. 29.

SM Staff
Previous articleShould NASCAR drivers be allowed to compete in other forms of motorsport?
Next articleCORVETTE RACING AT DAYTONA: Start of a New Era