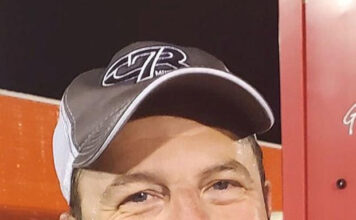 With the guidance of crew chief Doug George and the leadership of former ARCA Menards Series driver Codie Rohrbaugh, Kitzmiller is hoping his superspeedway debut will yield a strong finish in Saturday afternoon’s Lucas Oil 200 driven by General Tire.

“Without a doubt. this will be the biggest race of my career thus far and I’ve got a ton of knowledge and support behind me, I just hope to mind my manners and keep our No. 97 CR7 Motorsports Chevrolet out of trouble.”

To prepare the West Virginia native for his stock car debut, Kitzmiller spent two days testing at the “World Center of Racing” in January where the rookie utilized the open test to not only get comfortable in single-car runs but drafting too.

“I learned a lot at the test and I’m hoping that track time will pay dividends this weekend,” said Kitzmiller who hopes to run a limited ARCA Menards Series schedule in 2020. “Doug, Codie and all the guys on this CR7 Motorsports team were extremely patient with me as I got up to speed.

“We worked on qualifying stuff, pit road stuff and worked the draft a bunch. I understand that the intensity will ramp up in practice on Friday and then qualifying and the race on Saturday, but we should be ready.”

While the goal of every race car driver is to win, for Kitzmiller, it’s still about winning, but it’s also about learning and getting the best finish possible for his Mooresville, N.C-based team.

“This is the same car that Codie raced at Daytona and he was able to earn a seventh-place finish,” explained Kitzmiller. “I know from watching this race in the past, it can be an intense race. For me, my goal is to stay out of trouble, learn from the veterans and make our move near the checkered flag.

“A top-10 finish for me in my ARCA debut would certainly feel like a win, so that’s our goal.”
Daytona International Speedway will be a busy place for CR7 Motorsports in February. In addition to the ARCA Menards Series race, the family-owned team will return less than a week later with hopes of qualifying for the NASCAR Gander RV & Outdoors Truck Series (NGROTS) race with Codie Rohrbaugh behind the wheel of the No. 9 Grant County Mulch Chevrolet.

Rohrbaugh who has three ARCA starts at the 2.5-mile superspeedway will be looking to make his Truck Series debut at Daytona in his 12th career NGROTS start.