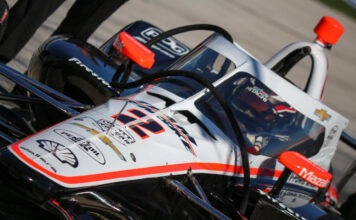 FORT WORTH, Texas (February 14, 2020) — Love was in the air at Texas Motor Speedway Friday, and it had nothing to do with Cupid slinging arrows around the world-renowned motorsports facility. Seven NTT INDYCAR SERIES drivers, including defending series and Texas Indy 600 champion Josef Newgarden, were on-site for what doubled as a rookie initiation and the debut of the sport’s aeroscreen safety canopy at TMS.

What resulted was universal praise for the aeroscreen and from the young drivers for their first experience in No Limits, Texas.

While Newgarden (Team Penske), Ed Carpenter (Ed Carpenter Racing), and Santino Ferrucci (Dale Coyne Racing w/ Vasser-Sullivan) were shaking down the high-powered open-wheel cars for their first-timer teammates, it also offered a chance for their first taste of how the car’s new windshield would change the racing at Texas.

As for the first-timers, Rinus VeeKay (Ed Carpenter Racing), Alex Palou (Dale Coyne Racing w/ Team Goh), Oliver Askew (Arrow McLaren SP), and Scott McLaughlin (Team Penske), there wasn’t a comparison to be made from a windscreen perspective, but it was a valuable learning experience for when the circuit returns for June’s Texas Indy 600.

The following are quotes from Newgarden, Carpenter, Ferrucci, and Askew at Friday’s test:

What kind of a step is the aeroscreen for the safety of INDYCAR drivers?

“I think that’s the last major safety advancement that the cars have needed was the head protection, and finally we have that.”

The aeroscreen is the biggest change to an Indy car since…?

Have you been at all surprised that Team Penske’s Scott McLaughlin has taken the INDYCAR world by storm this week?

“Not surprised by Scott one bit. He’s a champion. He’s deserved this opportunity. It’s actually been a lot of fun for us to have him in the team because we love watching him in Australia. Getting the chance to hang out with him and race cars together has been a total blast. We’re really looking forward to the month of May. I think he’s going to have a great run at the GP.”

How did you notice the aeroscreen change the racing at Texas Motor Speedway in your short run?

“There’s a couple little subtleties just in the way the air moves around. It’s quieter, which is different. Believe it or not that kind of changes the sensation of how you feel the car. Visually, it’s actually very good. There’s not any limits or distortion or anything like that.”

How does the change in air movement around you affect you in the cockpit?

“We don’t have the frontal pressure on the helmet that we’ve always had. It’s more coming down behind you. It’s actually wanting to push your head forward a little.”

Why is it important for veteran drivers to come out and get the cars dialed in for your rookie teammates?

“This is a place that’s so unique that even when a guy who’s run ovals comes here for the first time they’re kind of like, ‘Wow, this is different.’ You see all the teams putting a veteran guy in except Arrow (McLaren SP) just to make sure it’s comfortable and stable.”

You’ve only raced at Texas once before, but did you notice a difference between then and now by adding the aeroscreen?

“To be honest with you, you can’t tell it’s there. It’s not like anything stands out at me. It’s actually quieter.”

Sunset happens during the Texas Indy 600. Are there any concerns about a glare on the aeroscreen?

“It’s not any different from if you have one or without. When the sun gets low like that and you can’t see the track, you can’t see the track regardless. I don’t anticipate the spotlights being an issue at all, but I think the cars will look pretty sweet. We gotta put some LEDs on top of them and deck ’em out a little bit, make them look cool.”

How were your first few laps at Texas Motor Speedway?

“I really enjoy it. I’ve been looking forward to this test for a long time. I love ovals … we did a test at Kentucky Speedway last year in Indy Lights, and I kind of feel some similarities between those two tracks with the tri-oval and with how smooth the tracks are but it’s a completely different car, right? Much quicker. An extra 30 mph at those speeds feels like an extra 100.”

Is it an advantage or a disadvantage that your team didn’t have a veteran here to shake down the car for you?

“With my experience and how comfortable I am with ovals so far, I’m able to feel what the car’s doing, and that’s all the engineers really need to know. It’s an advantage for me because I’m getting more track time than the other rookies who are here.”

The group, minus McLaughlin, returns to Texas Motor Speedway for the Texas Indy 600 on June 6. Newgarden is the defending race winner, his first checkered flag at TMS.