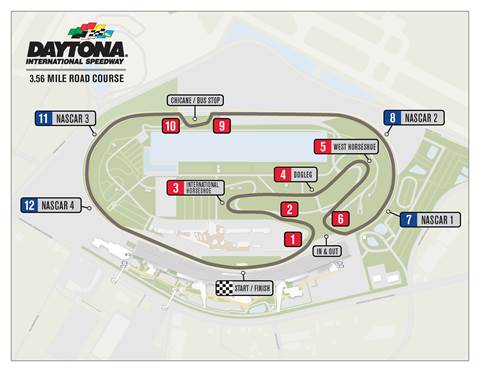 DAYTONA BEACH, Fla. (July 7, 2020) –  NASCAR was already set to return to Daytona International Speedway in late August, but now the iconic venue is set to host a double dose of two exciting NASCAR weekends during the month, one with unprecedented twists, literally.

NASCAR announced today that, in addition to the scheduled August 28-29 doubleheader weekend featuring the Coke Zero Sugar 400 and the Wawa 250 Powered by Coca-Cola, for the first time in history, Daytona International Speedway’s world famous 3.56-mile road course will play host to NASCAR’s three top national series, along with the ARCA Menards Series, on August 14-16.

Three events to be held on Daytona’s 12-turn, high-banked tri-oval/infield road course, are realigned races that were originally scheduled to be held at Watkins Glen International on August 14-16 – the NASCAR Cup Series, NASCAR Xfinity Series race and ARCA Menards Series. In addition, the fourth race – a NASCAR Gander RV & Outdoors Truck Series event is realigned from Iowa Speedway that was originally set for June 12.

The historic races will be held on the same road course as the Rolex 24 At DAYTONA, North America’s premier race for sports cars. Road-course racing has always been an anticipated, vital component of the makeup of the speedway, with the Rolex 24 first held in 1962 as a three-hour race called the Daytona Continental. The DAYTONA 200 for motorcycles was moved off the old Daytona Beach-Road Course to the speedway in 1961, and the majority of today’s course is used for the DAYTONA 200. The ribbon of asphalt was used in action this past weekend with the IMSA WeatherTech SportsCar Championship’s IMSA WeatherTech 240 At DAYTONA.

In March, it was announced that the 2021 Busch Clash At DAYTONA would move to the speedway’s 3.56-mile road course and be held under the lights on Tuesday, Feb. 9. Now, however, the August 14-16 weekend will be on the pole for the track’s first NASCAR road course weekend for NASCAR’s premier series and others.

“Daytona International Speedway has a storied history like no other in motorsports,” said Speedway President Chip Wile. “The sport of NASCAR gets to add a surprise chapter of road course racing to the venue’s legacy. Throughout the years, we have had many memorable moments with sports cars and motorcycles, but now NASCAR will take center stage on the road course at the World Center of Racing.”

Complete details on the road-course weekend, including fan attendance, is currently being finalized and will be announced in the near future.

Competition on the road course will be unlike any other challenge drivers have faced at Daytona International Speedway. In contrast to the tightly packed competition on the speedway’s famed 2.5-mile high-banked trioval, drivers will utilize approximately three-quarters of the tri-oval along with the challenging infield portion of the road course. That translates into 12 turns instead of the usual four. That challenge entails the high-speed entrance into Turn 1, as drivers dive left off the front straight to begin the twists and turns the infield offers, including the International (east) and west Horseshoe turns and the tricky negotiation of the backstretch chicane prior to a climb back atop the bank in Turn 3.

While this will be the first attempt of NASCAR’s three top-tier series on the heralded road course, it won’t be the first time NASCAR vehicles have been on the coveted layout. In the late 1960s, in smaller, stock-type cars, the NASCAR Grand Touring Division competed on the road course while the NASCAR Grand American cars were a constant in the early ‘70s, as well as the NASCAR Modifieds in the mid to latter part of the decade. Noted names of winners in those divisions included stars like Pete Hamilton, Buck Baker, Jim Paschal, Bobby Allison and Darrell Waltrip. The International Race of Champions (IROC) actually had its first race at Daytona in 1974 on the road course, with Mark Donohue winning in a Porsche (the next year moving to a Chevrolet Camaro and the oval).

Current NASCAR drivers who have competed in the Rolex 24 on the 3.56-mile road course include Kyle Busch, who was a participant earlier this year, and his brother Kurt, who was part of the event in 2005 and 2008, when he wound up third-place overall. Two-time DAYTONA 500 champion Jimmie Johnson, a seven-time starter in the Rolex 24, has two runnerup finishes in the event, in 2005 and 2008. Other former NASCAR drivers who had success in the Rolex 24 At DAYTONA include AJ Foyt, Mario Andretti, Jamie McMurray, Jeff Gordon, Dale Earnhardt, Dale Earnhardt, Jr., Mark Martin, Bill Elliott and Juan Pablo Montoya.

In addition to the dates for Daytona’s Road Course, NASCAR also announced the next installment of the 2020 schedules through the end of August. The Coke Zero Sugar 400 (Aug. 29) will mark the final time drivers have a chance to secure their position in the NASCAR Cup Series Playoffs while the Wawa 250 Powered by Coca-Cola will see the NASCAR’s future stars tackle the 2.5-mile trioval.

Daytona International Speedway is a state-of-the-art motorsports facility and was awarded the SportsBusiness Journal’s prestigious Sports Business Award for Sports Facility of the Year in 2016. Daytona International Speedway is the home of “The Great American Race” – the DAYTONA 500. Though the season-opening NASCAR Cup Series event garners most of the attention – as well as the largest audience in motorsports – the approximately 500-acre motorsports complex, also known as the “World Center of Racing,” boasts the most diverse schedule of racing on the globe. In addition to at least nine major event weekends, the Speedway grounds are also used extensively for events that include concerts, civic and social gatherings, car shows, photo shoots, production vehicle testing and police motorcycle training.