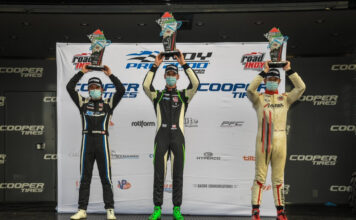 Sometimes it pays to make a late move. That approach doesn’t often yield results in professional auto racing because major league motorsport generally demands significant planning before the engines fire. But in this season of COVID 19, many long-held assumptions are being turned on their head. This is one such case.

Abel Motorsports of Louisville, KY has raced a partial Indy Pro 2000 schedule in 2020 with their lead driver, 19-year-old Jacob Abel. The team’s first pair of runs in the series this year saw young Abel wage an uphill battle at both Lucas Oil Raceway near Indianapolis and at World Wide Technology Raceway near St. Louis last month.

With the series Abel Motorsports is focusing on this season taking a summer break, Jacob and his team made a late call to load up their Indy Pro 2000 machine and head to Mid Ohio for a doubleheader event on the rescheduled IndyCar weekend. It turned out to be a most profitable move.

“We had issues almost the entire weekend,” commented Jacob. “We had mechanical problems in practice and qualifying. But we got it figured out in time for the first race Saturday. I couldn’t qualify so I started at the back of the pack, and I was able to pass 5 cars to end up 7th. Then, we really hit it right on Sunday. I had to start 13th in the second race; about four laps in, the skies opened up and it rained so hard they had to red flag the race. Mid Ohio is our home track. Before the red, all my laps there really paid off. Some of the contenders went off, I passed many more, and was up to 4thwhen they stopped the race.”

Series officials decided to run the remainder of the event late Sunday after the IndyCar round. Conditions were much different six hours later. “It turned hot and sunny by the time we got back on track,” commented young Abel. “We were still fast. When we went green again I was able to make a pass for third, and hang there the rest of the way. What a way to earn my first Road to Indy podium. I’m just thrilled.”

Team Principal Bill Abel was equally excited. “Jacob earned both Hard Charger awards on the weekend, gaining 5 spots Saturday and then 10 on Sunday. It was his best weekend so far in the Road to Indy. It’s a very tough series, so having that success is very gratifying.”

Now, Jacob and his team turn their attentions back to bidding for wins in Formula Regional Americas action at Sebring this weekend and Homestead Miami Speedway next weekend. Their plans to run additional Indy Pro 2000 events this year are up in the air but one thing is certain: Abel’s podium finish at Mid Ohio provides plenty of positive momentum for the balance of 2020 and beyond.

Abel Motorsports has competed in multiple open-wheel developmental series since 2017, winning the inaugural F3Americas championship in 2018. Stay current with the latest Abel Motorsports news by visiting the official team website, www.abelmotorsports.com. Abel Motorsports has driving and marketing opportunities available in several different types of cars for the 2021 season.