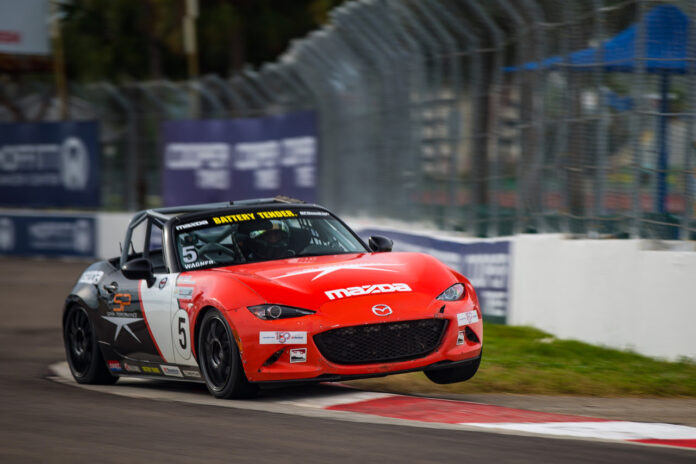 ST. PETERSBURG, Fla. (Oct. 23, 2020) – Gresham Wagner earned one Global Mazda MX-5 Cup presented by BFGoodrich® Tires point with his record-setting run to pole onboard the No. 5 Spark Performance entry on Friday. Wagner’s fast lap time of 01:24.6104-seconds set a new track record in the series’ first ever visit to the temporary street circuit.

With the top 13 runners all setting times within one second of the fastest before Gresham’s flyer, the 0.413-second delta to fellow front-row starter Selin Rollan marks a large gap in the ultra-competitive category.

Rollan might well have had more time to find in his No. 87 Spark Performance entry, but he didn’t get the chance to do so after making contact with the Turn 9 wall midway through the session and sending him to pit lane.

The qualifying session sets the grid for a $200,000 double-race day on Saturday. Holding second in the championship with a seven-point gap to leader Michael Carter (No. 05 Carter Racing Enterprises), young Robert Noaker (No. 13 Robert Noaker Racing/Slipstream Performance) nabbed third, with Carter set to start the Saturday morning race alongside him in the second row.

Rookie of the Year leader Jared Thomas (No. 96 Carter Racing Enterprises) continued his strong 2020 campaign with a fifth-place starting spot, as Robert Stout (No. 3 White Racing) claimed sixth on the grid. Stout won the 2017 race in the series’ last run on a temporary street circuit in Toronto.

“The thing for this track is you have to go by feel,” said Wagner. “There are not as many braking markers for a lot of the corners not as many references, just walls. No one has been here, so I think you have to drive the car based on feel, find the limit early in the session, and try to stick to that.”

Saturday will see the field take the green flag twice, first at 8:30 AM and then again for the season-finale 45-minute race at 1:30 PM ET. With a clear view of the race start, Wagner is cognizant of the full field of contenders behind as he looks to claim his third (Mid-Ohio, New Jersey Motorsports Park) win of the season.

“For the race, I think you need to be aggressive,” said Wagner. “This track needs a lot of respect, but you can’t back off too much or these guys will be right there. You have to be conscious of some of the perils here, but you have to drive it as hard as anywhere else we go.”

Live timing and camera feeds of the final two Global Mazda MX-5 Cup races of 2020 will be available on https://www.mx-5cup.com/results/live-timing.