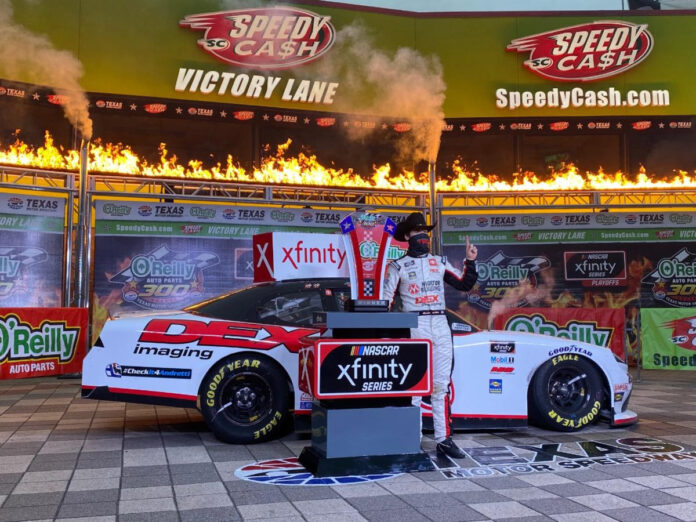 FORT WORTH, Texas (OCT. 24, 2020) – Second-generation NASCAR driver Harrison Burton earned his first stage win of the 2020 NASCAR Xfinity Series season, spun just past the halfway point and then battled back to pass Noah Gragson on the final turn of the final lap to win the O’Reilly Auto Parts 300 at Texas Motor Speedway.

The victory, by 0.445-of-a-second, was the third of the season for the series rookie and Huntersville, North Carolina native. His first two victories came at Auto Club Speedway in March and Homestead-Miami Speedway in June.

“We were obviously pushing the limits all day and that’s just kinda what we came to do, to be fast,” Burton said. “To win our first stage of the year was a good sign. To do what we did on the last lap was incredible. I don’t know how it happened but I’m pretty damn glad it did.

“My team had talked to me about what the other guys were doing through (Turns) 3 and 4 to get speed and I kinda (multiplied) that by 3 or 4 and it stuck. I don’t know how. Hats off to the 9 (Gragson) for racing me clean today. Hats off to the rest of the competitors, man. That was such a fun race. What a cool place to win it. Now we get to go home with cowboy hats. That’s awesome.”

Burton and his father, Jeff Burton, who won the inaugural NASCAR Cup Series race at Texas Motor Speedway in 1997, are the first father and son to win NASCAR national series races at No Limits, Texas.

Nine-time race winner in 2020 Chase Briscoe, who punched his ticket to the Championship 4 last week by winning at Kansas Speedway, started from the point for the 200-lap, 300-mile affair. He handily led the first 35 laps despite two caution flags but a broken shock mount sent him to the garage for repairs with 10 laps remaining in the first stage. Brandon Jones had been battling Briscoe for the lead and took the No. 19 Joe Gibbs Racing Toyota to the Stage 1 win at the conclusion of Lap 45.

Green-flag racing resumed on Lap 52 with Harrison Burton, who did not pit under caution, in the No. 20 Joe Gibbs Racing Toyota at the point. Briscoe returned to competition on Lap 57, 16 laps down to the leaders. Championship contender Ryan Sieg was forced to take the No. 39 RSS Racing Chevrolet into the garage with a mechanical issue, returning multiple laps down to the leaders and forced to win next week to make the Championship 4.

Burton, already eliminated from the championship chase, earned his first stage win of 2020 when the green-and-white checkered flag waved at the conclusion of Lap 90.

Allgaier was leading on Lap 107 when Burton, running fourth, spun on his own exiting Turn 4. The No. 20 Toyota went spinning through the grass in the tri-oval but was able to continue on.

Multiple cautions involving Harrison Burton, Riley Herbst, and Jeb Burton, and the resulting pit stops, kept the middle portion of the final stage in a constant state of flux. Chastain took the lead on the Lap 164 restart with Allgaier in tow and quickly moved the No. 10 Kaulig Racing Chevrolet to a 1.5-second lead.

The 10th caution of the day involved three drivers and major championship implications. On the Lap 176 restart, Chastain had the lead going into Turn 2 but was forced up when Allgaier got loose underneath him. Those two cars and that of Jones all made contact and spun in the middle of the backstretch forcing the yellow flag to wave yet again. All three cars sustained damage, with Allgaier and Jones forced to the garage while Chastain was able to continue.

The final restart on Lap 186 found Gragson start from the point and quickly built a sizable lead. Burton moved into third behind Alfredo, got by him with two to go and worked his way up to Gragson’s bumper entering the final turns. Gragson moved up the track in the final turn, losing momentum and allowing Burton to slide by underneath to take the checkered flag.

Tickets for the Autotrader EchoPark Automotive 500/SpeedCash.com 400 doubleheader are available starting at $48 at https://www.texasmotorspeedway.com/events/texas-500-nascar-race-weekend/. One ticket will be good for both races and kids 12 and under are just $10.

Click for a comprehensive list of answers to frequently asked questions about the Autotrader EchoPark Automotive 500 weekend.