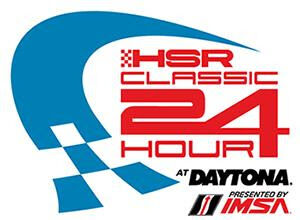 DAYTONA BEACH, Florida (October 29, 2020) – The latest entry list for the 2020 Historic Sportscar Racing (HSR) Classic Daytona presented by IMSA was released today for the Classic 24 Hour race at Daytona International Speedway (DIS) that runs for the sixth time at the “World Center of Racing” November 4 – 8.

“After the 2020 we have all endured, I can honestly say this year’s entry list is as impressive as any in the event’s history when it comes to the passionate dedication of our HSR competitors and the resolve and determination of the all-American racer,” said HSR President David Hinton. “Several times this year we wondered if this event was even going to be allowed to happen, but happily we are heading into another edition this week with a good field of cars and drivers.”

While a handful of international competitors have found a way to compete in this year’s HSR Classic Daytona, the travel limitations in place in response to the COVID-19 global pandemic have forced several dozen competitors and teams from outside the U.S. to regretfully miss this year’s race. The gap has been filled in part by the stout support of American competitors from around the U.S., including as far away as California, Arizona, Minnesota and Massachusetts.

“The American motto of ‘The Show Must Go On’ lives strong with this year’s HSR Classic Daytona presented by IMSA, but we will race while thinking of all of our friends and competitors from Europe and beyond who so badly wanted to be with us in Daytona this year,” Hinton said. “We will miss you all this year but look forward to seeing you back again in 2021.”

One of this year’s jaw-dropper entries is the 1979 No. 94 “Road Atlanta” Porsche 935 (pictured above) from Carlos de Quesada and his Alegra Motorsports team. The recently restored ex-Whittington Brothers Racing 935 makes its first race start since winning the 1979 IMSA GT finale at DIS more than 40 years ago. Alegra has entered the 935 in next weekend’s HSR Daytona Historics event with co-drivers de Quesada, his son Michael de Quesada and Scooter Gabel.

Winning and renowned German manufacturer BMW is the featured marque of this year’s HSR Classic Daytona presented by IMSA, and various generations of the Munich-based manufacturer’s past and more recent sports cars will take to the spotlight at the “World Center of Racing.”

The 2020 Classic Daytona presented by IMSA is also the second running of the race with a reformatted and expanded structure of seven Run Groups. The major change introduced last year was the division of the original Group E into two distinct classes, each featuring modern but retired prototypes and GT race cars from this century.

Run Group E remains a showcase of such iconic machines as the Peugeot 908 HDi FAP that competes in the group with Daytona Prototype International (DPi) and LMP2 race cars just past their prime, including the Ligier JSP2.

Group A – 1962 – 1972: The oldest and perhaps most memory-stirring division, Group A features legendary and early FIA-era prototype and GT machines that raced in international and world championship competition. The group has attracted race cars such as the Lola T70 and T210 and production-based cars of the era include a Shelby Daytona Coupe, Shelby GT350s, a Jaguar XKE Low-Drag Coupe and a strong lineup of early Corvettes and Porsche 911s. One fan favorite entry is sure to be NASCAR Hall of Famer Ray Evernham’s big-bore 1965 No. 19 Corvette Roadster (pictured below) prepared by Big Iron Garage.

Group B – 1973 – 1982: Evoking the same emotion and memories of Group A with a little more turbocharged power and wide-body aerodynamics, Group B has attracted a Porsche 935/K3 and other Porsche IROC cars and other 911 based models and BMW CSLs. Group B also features several ultra-quick and classic sports prototypes, including Chevron B21, B26 and B36 models and a Lola T294.

Group C – 1983 – 1993: The prime of the GTP and Group C era is at the heart of this division that always draws a quality entry. Contenders this year include a pair of Porsche 962s and a Jaguar XJR-5 which share the track with a Porsche Fabcar and Spice SE87L GTPL “Camel Lights” machines. Several different models of production-based Porsches, from a 944 Turbo to several 911 models, add to the Group C mix. Car owner Angus Russell has finished on the Classic Daytona Group C podium before, but nothing short of the overall victory is the goal this year in his 1985 No. 15 ex-Kremer/Leyton House Porsche 962C (pictured below) prepared by Amalfi Racing.

Group D – 1994 – 2003: Historic but familiar, Group D is open to first-generation Daytona Prototypes and 1990’s era sports racers such as the Riley & Scott Mk III, in addition to production-based cars like the always-competitive BMW M3 and Porsche 993 GT2 Evo.

Group E – 2000 – 2018: This blue-chip Group lets ALMS and Le Mans prototypes not eligible to race at Daytona in their prime get a chance to hit the 3.56-mile high-banked road course. This year looks set to be a battle royale between defending Group winner David Porter in his GMT Racing 2007 No. 7 Peugeot 908 HDi FAP (pictured below) and a quick LMP2 competitor. Pierce Marshall and Eric Foss are fresh off a victory earlier this month in the HSR Fall Historics at Michelin Raceway Road Atlanta in Marshall’s ex-ESM Tequila Patron 2014 No. 31 Ligier JSP2 from Matador Motorsports. On the production-based side, Group E offers one of the most diverse lineups of the race. A Dodge Viper ACR, Cadillac CTS-V, Lamborghini Gallardo, Ferrari F458 Challenge and Mercedes-AMG GT3 will take on a solid variety of late-model Porsches.

Group F – 2000 – 2018: Group F showcases modern Prototype and GT race cars a few years removed from some of their Group E counterparts but just as attention-grabbing on the DIS high banks. The division is now home to the popular Oreca FLM09 Le Mans Prototype Challenge (LMPC) “PC” cars and Gen 2 and Gen 3 Daytona Prototypes “DP” cars no longer eligible for current IMSA competition. The GT field is just as strong with a solid entry of Porsche 993, 996, 997 and Caymans taking on Corvettes, Camaros, an Aston Martin Vantage, a second-generation Ford GT Mk7 and a Panoz Esperante GT2.

Group G – HSR Cars: Group G is the division for HSR classes not represented in the other groups. Offering a mix of primarily production cars from six different decades of competition, Group G includes many of the same teams and race cars that compete in HSR’s Vintage GT and Historic GT groups and the HSR Classic RS Cup and HSR Global GT series. Several different Porsche models from all generations make up the majority of the entries, but several Ferraris, Camaros and Corvettes will battle with a Datsun 240Z, Aston Martin and even a lone Honda Prelude former IMSA Firestone Firehawk Challenge car.

The HSR Classic Daytona debuted in 2014 at the “World Center of Racing” and the immediate success of the inaugural event called for a second running in 2015. After a year off, the 24-Hour Classic Race on the 3.56-mile DIS road course returned in 2017 and is now an annual fixture on the HSR calendar.

A competitor test day on Wednesday, November 4, kicks off the 2020 HSR Classic Daytona presented by IMSA. The full-day test sets the stage for the following four days of official competition that culminates with the classic 24-hour race from Saturday, November 7, at 1 p.m. EST straight through to the final checkered flag 24 hours later on Sunday, November 8.

Information on the 2020 HSR Classic Daytona and HSR Daytona Historics, including the event schedule and much more, can be found by clicking here.

Spectator tickets for the HSR Classic Daytona can be purchased at DIS Gate 40, off of Williamson Boulevard, beginning Thursday, November 5 at 7:30 a.m. EST. A variety of single day, two-day and three and four-day weekend passes are available for purchase as well as RV camping options and parking passes. Learn more at www.HSRTickets.com.

The 2020 HSR Classic Daytona presented by IMSA entry list can be found by clicking here.