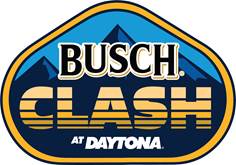 DAYTONA BEACH, Fla. (Nov. 17, 2020) – NASCAR and Daytona International Speedway today announced the criteria for eligibility for NASCAR Cup Series drivers to compete in one of the most unique and anticipated events in all of motorsports – the historic 2021 Busch Clash At DAYTONA on the iconic DAYTONA Road Course.

Set for Tuesday, Feb. 9, under the lights, the 2021 Busch Clash At DAYTONA will mark the first time in history the traditional exhibition-style event will tackle the track’s 14-turn, 3.61-mile road course, which was introduced for the first time ever to NASCAR’s top three national series this past August. The 43rd Annual Busch Clash At DAYTONA, which kicks off DAYTONA Speedweeks Presented By AdventHealth, will be held on the same course (with the lone addition a NASCAR fourth-turn chicane) of as the Rolex 24 At DAYTONA and the DAYTONA 200, North America’s premier races for sports cars and motorcycles, respectively.

Due to the pandemic, NASCAR adjusted the format for setting the field for a majority of its races in 2020. As such, the eligibility for next season’s Busch Clash At DAYTONA – which has long been tied to Busch Pole Award wins in the previous season – will have a new look. The eligibility requirements for the 2021 edition are:

In contrast to the tightly packed competition on the Speedway’s famed 2.5-mile high-banked-tri-oval, the reimagined Busch Clash, which was held for the first time at Daytona in 1979, will utilize approximately three-quarters of the tri-oval along with the challenging infield portion of the road course. That translates into 14 turns instead of the usual four.

“The excitement by both the drivers and our fans leading up to the 2021 Busch Clash At DAYTONA is unprecedented,” said Speedway President Chip Wile. “NASCAR’s initial visit to the DAYTONA Road Course in August delivered big time, with incredible competition, adding to the legacy of the famed road course made famous with sports cars and motorcycles.

“Having the Busch Clash At DAYTONA on Tuesday night also adds to the anticipation of an action-packed Speedweeks calendar. With the talent level in the field, the race will now clearly have its own look and feel during DAYTONA Speedweeks Presented By AdventHealth in 2021 and beyond.”

Tickets for the Busch Clash, as well as the 63rd annual DAYTONA 500 (Sunday, Feb. 14) – in which Denny Hamlin goes for a record third straight triumph in the Great American Race – can be purchased online at www.daytona500.com or by calling 1-800-PITSHOP. Fans also have the opportunity to purchase tickets and multi-day packages with a “fresh look” for Speedweeks Presented by Advent Health:

About Daytona International Speedway
Daytona International Speedway is a state-of-the-art motorsports facility and was awarded the SportsBusiness Journal’s prestigious Sports Business Award for Sports Facility of the Year in 2016. Daytona International Speedway is the home of “The Great American Race” – the DAYTONA 500. Though the season-opening NASCAR Cup Series event garners most of the attention – as well as the largest audience in motorsports – the approximately 500-acre motorsports complex, also known as the “World Center of Racing,” boasts the most diverse schedule of racing on the globe. In addition to at least nine major event weekends, the Speedway grounds are also used extensively for events that include concerts, civic and social gatherings, car shows, photo shoots, production vehicle testing and police motorcycle training.