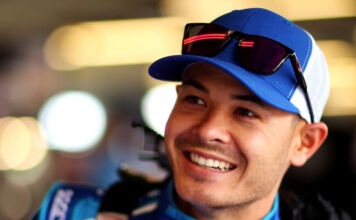 Heading into the 2021 NASCAR Cup Series season, a lot of the eyes in the NASCAR community are on Hendrick Motorsports and the driver of the No. 5, Kyle Larson. Larson, the former driver of the No. 42 Chip Ganassi Racing Chevy, lost his ride a few races into the 2020 Cup season following his utterance of a racial slur during an online racing event.

For all intents and purposes, the mistake seemed less malicious and more insensitive than anything. Regardless, the punishment was adequate in the big picture of things – he lost his ride, sponsorships, and was suspended from NASCAR until he completed sensitivity training. Larson went above and beyond that, taking the initiative to participate in several outreach programs in an effort to educate himself and to better understand the racial plight and disparity in America, and on the announcement of his return to NASCAR competition he made it clear that he wasn’t going to stop with that.

In the meantime, he managed to win a horde of dirt racing trophies while away from NASCAR; it’s safe to say that along with being paired with NASCAR’s 2020 Cup championship organization it is looking like Larson may be in the hunt for a title for the first time in his career. All of that will depend on his actions off and on the track. Sure, the on-track matters look to be a cinch – Larson is a wheelman in the truest sense. But off-track? 2020 was a shaky year in regards to social unrest, so Larson’s actions will do the talking on whether or not he’s serious about change for the better. There will be a lot of scrutiny in that area.

With that said, Chris Monez was recently tabbed to be Larson’s spotter for the 2021 season. Already, NASCAR Twitter has exposed some questionable aspects regarding Monez and whether or not he’s the type of influence needed around Larson. A cursory search of Monez’s Twitter exposed several questionable tweets and likes that indicate a socio-political fringe mindset away from the track, including his subscription to a cult-like thought group known on the internet as QAnon. This included tweets with the group’s slogan among other things.

In a nutshell, QAnon is an extremely dangerous fringe conspiracy idea that has zero basis in fact and has been labeled as a terrorist threat by the FBI, and in short, believes that Donald Trump is working in a clandestine fashion with several law enforcement officials behind the scenes in order to take down a Satanic-worshipping cabal of celebrity and Democratic pedophiles in a mass event called “The Storm,” where they will then be subject to public executions.

Yes, that is what they actually believe.

In the meanwhile, this is paired with several likes of anti-COVID mask tweets as well as a like of Trump’s tweet from August when he asked if/when Bubba Wallace would apologize for the noose found at Talladega in the summer. With all of this being said, it’s clear where Monez’s interests lie. It’s one thing to subscribe to a political ideology. That’s one of the many great things about being an American, where we can have that sort of freedom. But in 2020, socio-political ideologies began to merge with baseless fringe conspiracies, and many others seemed to jump off the mental deep end. If Monez’s Twitter likes amount to anything it seems like he’s one of those who made the plunge as well.

That said, does it make sense to pair him with Larson, a driver who is working hard to prove that he’s changed? Is Monez the kind of influence he needs? For what it’s worth, any kind of social media “likes” a user has is a form of enabling/endorsing. And despite a substantial amount of NASCAR Twitter claiming that it was “wrong” for these old likes to be looked through, there’s an old adage from the early days of social media where anything is fair game when it’s in the public eye. It just so happens that Twitter is a public forum, and pairing Monez’s name with Larson makes him a very public figure.

In other words, Monez’s “likes” and “tweets” are definitely fair game when it comes to being scrutinized. An argument can be made that if he didn’t want the NASCAR world to see it, then he wouldn’t have tweeted what he tweeted or liked what he liked. Being Larson’s spotter is no small thing. He’ll play a very integral role on race day considering the spotter is one of the top important roles on the team.

So is it worth having someone with that mindset as an influence around Larson? What’s the price of victory worth in NASCAR? At the end of the day the team is privately owned so there’s no point in the social media outcry of “Fire him!” or what have you. But once again, Monez’s subscribing of dangerous conspiracy theories (with zero basis in fact) could compromise Larson’s drive for change. So is it worth it? Does it even matter?

There was once a point where people could actually keep nonsense like that away from the race track, along with talk of religion or politics. But in 2020, a lot of people began making that stuff their identity in an attempt to make those opinions and ideologies valid. Suffice to say, from a logical point of view, opinion isn’t fact and should never be considered valid. Yet these days, there aren’t a lot of logical people out and about.

Sadly, among those crazies, one is now a spotter for a driver on the eve of what could be the most important season of his career. And for all the work that driver has put in to come back, this adds extra scrutiny on an otherwise heavily scrutinized season. So when all is said and done, HMS and Larson must consider if it is worth it keeping this guy around.