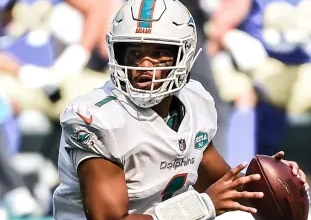 Tua to Give Command for Drivers to Start Engines While Vilma to Wave Green Flag for Event at Homestead-Miami Speedway this Sunday, Feb. 28, at 3:30 p.m. ET on FOX

HOMESTEAD, Fla (February 25, 2021) – Homestead-Miami Speedway’s 1.5-mile oval will become a gridiron of sorts this weekend.  As the track is set to host the NASCAR Cup Series Dixie Vodka 400 on Sunday (3:30 pm ET, FOX/MRN-Sirius XM Channel 90) two local football stars will have prominent roles in the race, the third of the 2021 NASCAR season.

Miami Dolphins quarterback Tua Tagovailoa will serve as the virtual Grand Marshal for the race and utter the most famous words in motorsports, “Drivers, Start Your Engines!” Miami native and former University of Miami Hurricane and Super Bowl-winning linebacker Jonathan Vilma will kick off Sunday’s race, as he waves the green flag from high atop the start/finish line in the starter’s stand.

“Having Tua and Jonathan join us for this special weekend is a true honor, and we are thrilled to host them,” said Homestead-Miami Speedway President Al Garcia.  “Tua helped to return the Dolphins to their winning ways last year, and Jonathan was a key member of several successful University of Miami teams, continuing the school’s tradition of greatness.  We know that many NFL players have recently taken a vested interest in NASCAR, and we are happy that both will have the opportunity to see just how exciting our sport can be.”

Tagovailoa was the fifth overall pick in the 2020 NFL Draft.  He started nine games in his rookie season as the Dolphins compiled a 6-3 record in his starts.  He completed 186 of 290 passes for 1,814 yards and 11 touchdowns last year and led the Dolphins to wins in each of his first three starts.

Prior to his NFL career, he played at the University of Alabama where he set school single-season records as a sophomore in 2018 with 43 touchdown passes and 3,966 passing yards.  He was the winner of the Walter Camp Award and the Maxwell Award that year, while finishing second in the Heisman Trophy balloting, and guiding the Crimson Tide to the BCS National Championship Game.

Vilma grew up in Miami and attended Coral Gables High School.  He went on to star at the University of Miami where he was a critical member of a defense that helped the Hurricanes to the 2001 National Championship.  He was drafted in the first round by the New York Jets in 2004, and went on to have a 10-year NFL career (2004-13).

He also played with the New Orleans Saints and was the heart and soul of a defense which helped New Orleans to the franchise’s only Super Bowl win, following the 2009 season.  Upon conclusion of his NFL career, Vilma got in to broadcasting, serving as a college football analyst for ABC and ESPN.  He is now an NFL game analyst for FOX, where he works alongside play-by-play announcer Kenny Albert.

Grandstand tickets are still available for the Contender Boats 250 on Saturday with many great seating options, including the “Family 4-Pack.” This special $80 offer includes 2 adult tickets, 2 kids tickets (12 and younger), and 2 Racing Electronics scanner rentals to get the inside track of all the action on the track. A number of premium seating options are also available for Saturday’s race. Individual adult tickets start at just $30 with kids 12 and under free for the Contender Boats 250 with the purchase of an adult ticket.

Homestead-Miami Speedway will host a limited number of fans for both events. Fans seeking all ticket options, as well as learning all safety protocol guidelines for the weekend, can visit www.HomesteadMiamiSpeedway.com or call 866-409-RACE (7223).