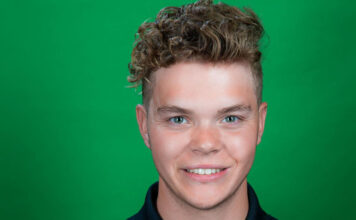 The Hollister, Calif. native joins the Mooresville, N.C.-based team on the heels of two years of CARS Late Model Stock competition where he earned a career-best third at Orange County (N.C.) Speedway in 2019.

Lemke has been winning championships for more than half his 18 years, starting in Quarter Midgets at age eight and rising through the Mini Cup ranks. In 2017, he graduated to the USAC Western Midget Series and finished second in overall points and clinched the Rookie of the Year award.

In 2018, he won both the pavement and overall championships in the USAC Western Midget Series, as well as Rookie of the Year honors in the RPM Pro Late Model Series at Madera (Calif.) Speedway.

He graduated to the immensely popular and competitive CARS Tour where he joined JR Motorsports and competed in nine of the 11 CARS Late Model Stock events and finished 11th in the championship standings.

Most of Lemke’s racing efforts for 2020 were sidelined due to the COVID-19 pandemic, but he did compete in a few CARS Tour races, as well as competed for Hawk McCall Motorsports in the NASCAR Advanced Auto Parts Weekly Series.

This year in addition to running the ARCA Menards Series Chief Showdown Series and select ARCA East and West event for RJR, he will continue a modest presence on the West Coast in Pro Late Model races with Naake-Klauer Motorsports.

“I’m grateful for this opportunity to join Rette Jones Racing and compete in the ARCA Menards Series this season,” said Lemke. “The team has already won this year, so it is a goal of mine to keep adding checkered flags to their year.

“I am going to be racing at tracks where I don’t have any experience, but I have confidence in Mark and the team and our ability to be successful right out of the box. I’m looking forward to Toledo and the rest of the races in 2021.”

Co-team owner and crew chief Mark Rette is looking forward to working with Lemke and putting results on the table.

“Rette Jones Racing is thrilled to welcome Adam to the team,” offered Rette. “He is focused on making his transition to ARCA a successful and we are honored that he has entrusted Rette Jones Racing to lead his career.

“Toledo has been a good track to Rette Jones Racing over the year and we look forward to continuing that same path in a few weeks – as well as the rest of the 2021 season.”