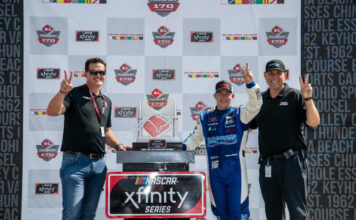 LEXINGTON, N.C. (June 18, 2021) – As part of a multi-year agreement with Kaulig Racing, AJ Allmendinger will continue competing full-time in the NASCAR Xfinity Series (NXS) and part-time in the NASCAR Cup Series (NCS) in select events for the 2022 season.

“Not only are we planning on making a splash in the NASCAR Cup Series, we plan on continuing to trophy hunt in the Xfinity Series!” Said team owner, Matt Kaulig. “AJ has been a phenomenal addition to this Kaulig Racing family, and we are glad to have him back with us moving forward.”

Since making his first start for Kaulig Racing in 2019, Allmendinger has earned five wins, 16 top five and 19 top-10 finishes in the NXS, with the most recent win coming at Kaulig’s home track of Mid-Ohio Sports Car Course.

“Over the past three years, I have fallen in love with this team and have enjoyed every aspect of trying to help the organization grow,” said Allmendinger. “To know that I will continue to be a part of it moving forward and that this will most-likely be the last NASCAR team I drive for, is truly special. I appreciate Matt Kaulig, Chris Rice and all the men and women at Kaulig Racing for allowing me to be a part of this team. I can’t wait to see what the future holds on both the Xfinity and Cup sides of the program and what it will look like for Kaulig Racing. I’m thoroughly enjoying it, and I can’t wait for the next couple of years together.”

In only two starts in the 2021 NCS season, Allmendinger has earned the team’s best NCS finish, a top five at Circuit of the Americas, as well as a top-10 finish at the Daytona International Speedway road course earlier this year.

“Not only a good colleague, AJ has become a good friend over the past few years,” said Kaulig Racing president, Chris Rice. “He has long been considered a ‘Road-Course Ringer,’ but since joining Kaulig Racing, he has proven to be an all-around talented driver, and we can’t wait to continue having him elevate our program.”

Slated to run the remainder of the road-course races for Kaulig Racing in the 2021 NCS season, Allmendinger will continue his part-time NCS schedule for the 2022 season, while also competing for the NXS championship for the second year in-a-row.