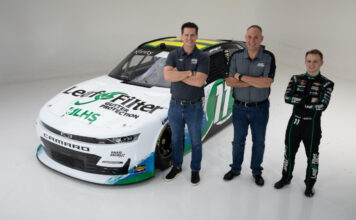 LEXINGTON, N.C. (June 18th, 2021) – Kaulig Racing announces Justin Haley will race full-time in the NASCAR Cup Series (NCS) for the 2022 season as part of a multi-year agreement, following the team’s procurement of two charters for the upcoming season.

Matt Kaulig’s affinity for NASCAR began in 2014 when he decided to put his company, LeafFilter Gutter Protection, on a NCS car as the primary partner. Bit by the NASCAR bug, Kaulig formed his own team, Kaulig Racing, in 2016 and began full-time competition in the NASCAR Xfinity Series (NXS).

“I’m extremely proud of how far Kaulig Racing has come in just a few short years,” said Matt Kaulig, Kaulig Racing team owner. “We entered our first Daytona 500 in 2020 and have already made it known in just a handful of races that we are there to compete. It’s been no secret that going full-time racing in the NASCAR Cup Series was our goal at Kaulig Racing, and that is exactly what we are doing by purchasing two charters for 2022 and having Justin Haley as our first, full-time driver!”

Haley, who has served as Kaulig Racing’s longest-running, full-time driver in the NXS, will continue his full-time commitment as the team’s first-ever, full-time NCS driver. Haley, a past winner in the Coke Zero 400 at Daytona International Speedway in the NCS, has driven the team’s flagship No. 11 Chevrolet in the NXS since 2019.

“I’ve been so fortunate the past three years to drive for an amazing team owner like Matt Kaulig,” said Haley. “He has been a great mentor in my professional career, as well as my personal life away from racing. It’s been my dream from the start to race full-time in the NASCAR Cup Series, and to do so with everyone at Kaulig Racing just feels right.”

During his tenure at Kaulig Racing, Haley has earned three wins, 15 top five, and 50 top-10 finishes for Kaulig Racing in the NXS, including the team’s first-ever NCS start in the 2020 Daytona 500.

“This is an opportunity of a lifetime for me, and I couldn’t be more thankful for the endless support from Matt Kaulig and Chris Rice,” continued Haley. “This team has done more for me than I could ever do for them. I’m so honored to stay in the Kaulig Racing family for years to come.”

Following the team’s first NCS start in 2020, the team has since made four starts in the series for the 2021 season, and has already earned a top five and two top-10 finishes in the No. 16 Camaro ZL1 1LE.

“We are confident that this is the right time to take this next step for Kaulig Racing,” said Chris Rice, president of Kaulig Racing. “I had the honor of being a part of handpicking Justin Haley as the driver of our No. 11 car in the NXS, and he has truly become an integral part of this Kaulig Racing team. We feel it’s only right that he is a part of taking that next step with us, and we are looking forward to the next couple of years with him.”

Justin Haley will make his next appearance in Kaulig Racing’s No. 16 Camaro ZL1 1LE in February of 2022 to kick start both his and Kaulig Racing’s first, full-time NCS season. Additional partnership announcements will come at a later date.